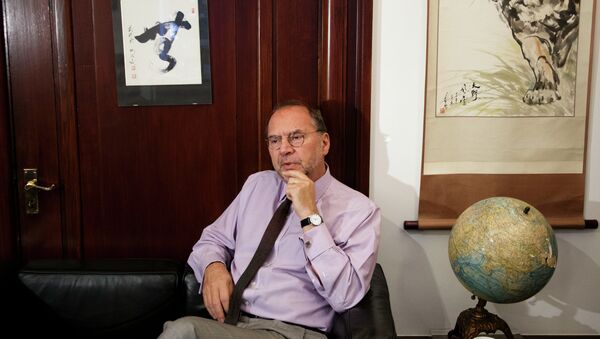 Peter Piot, the microbiologist who co-discovered Ebola, calls on London to intensively train specialists in outbreak control and provide them with a relevant scientific basis. Otherwise pandemics may hit the country, he warns.

Survivor Calls for Global Ebola Solution in Alternative Christmas Message
MOSCOW, December 26 (Sputnik) — The United Kingdom is vulnerable to future pandemics due to its lack of a specialized agency responsible for epidemics, the scientist who co-discovered the virus said Friday, as quoted by The Independent newspaper, commenting on the slow response to Ebola outbreak.

"I think it's time the UK and Europe had a well-trained corps of people who are specialists in outbreak control but underpinned by strong research and science. We don't have that and that makes us vulnerable," Peter Piot said referring to the inefficient and slow response to Ebola outbreak, as quoted by The Independent.

Piot noted that the consequences of the Ebola outbreak could have been less grave if the global community had been better prepared and managed to react faster. "The lesson for the future is: act early, act immediately," Piot said, as quoted by The Independent.

Ebola Surging in Sierra Leone Despite Signs of Progress: US CDC
The scientist also praised the US Centers for Disease Control (CDC), adding that Public Health England or the European Centre for Disease Prevention and Control have not paid enough attention to Ebola virus.

"You don't want to depend on information coming from the US. CDC is a great organization, but we need that capacity ourselves as a nation. That's a national security issue," The Independent quoted Piot as saying.

The current Ebola outbreak began in December 2013 in Guinea. In 2014 the virus spread to Liberia, Sierra Leone, Nigeria and Senegal. More than 7,500 people died out of almost 20,000 infected, according to WHO data. Currently there is no cure for Ebola, but several countries, including Russia, are developing a vaccine.