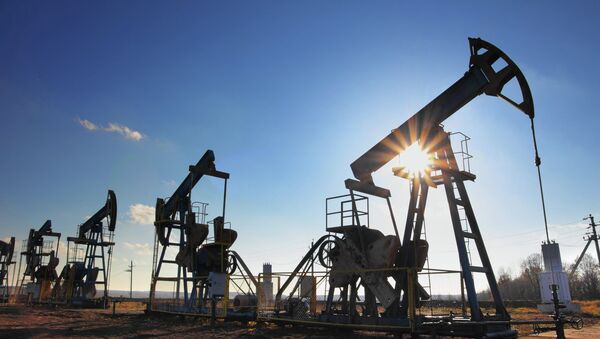 Russian Finance Ministry currently bases its estimates over oil prices on $60 per barrel, while its ruble rate forecast is 51 to $1 in 2015.

A sharp decline in oil prices had significant impact on Russia's economy as the country's budget is largely dependent on the export of energy resources.

During the last few months, oil prices have declined sharply from above $110 per barrel to $60 per barrel amid oversupply on the market.

In November, oil prices dropped even further, when the Organization of the Petroleum Exporting Countries (OPEC), which accounts for some 40 percent of world oil output, decided not to cut oil production.

Russia should have a surplus federal budget by 2017 if oil prices remain at around $70 per barrel, the Russian finance minister said.

“We see that we need to have a balanced budget by 2017 with an oil price…which, according to our estimates should be around $70 per barrel,” Siluanov said.

“We at the Finance Ministry see the task of balancing the budget at $70 per barrel by 2017,” he added.

According to the minister, to achieve this goal in 2016 it will be necessary to maintain the same level of budget spending as in 2015, which will amount to about 15 trillion rubles.

Russia is currently facing an economic slowdown, with fluctuations in the value of the Russian ruble against the main foreign currencies. The weakening of the national currency has been attributed to low oil prices, as the sale of oil accounts for a significant part of Russian budget revenues. Other reasons for the economic slowdown are the unstable geopolitical situation surrounding the Ukrainian crisis and sanctions imposed by a number of Western countries against Russia over the country's alleged meddling in Kiev's internal affairs.

Slashing the Russian federal budget for 2015 by 10 percent is insufficient and a decision to optimize or increase the use of reserve funds will be made in January, Russian Finance Minister Anton Siluanov said Friday.

“Obviously cutting 10 percent is insufficient in order to balance the budget, so we have suggestions on what’s needed for future measures. At the beginning of next year it will be necessary to discuss and define what we’re going to do: either a further optimization, a consolidation of the budget, or using large volumes of the federal reserve funds,” Siluanov said.

“As an economist, I believe that a third is too high of a level. I believe it’s necessary to reallocate or restructure expenses to the infrastructure, education, and so on. It’s difficult to cover such military expenditures, so we should be talking here about optimizing their numbers, especially in the law enforcement organs where there’s a large reserve,” Siluanov said.

On December 18, Russian President Vladimir Putin stated that the Russian Defense Ministry's budget would be increased to $50 billion in 2015.

On December 5, Putin told the Russian government to cut budget expenditures by at least five percent in 2015-2017, specifically noting that the cuts should not affect expenditures for national defense and security.

Russia’s 2015 budget is estimated to have extra expenditures of 500 billion rubles ($9.5 billion at the current exchange rate) and Moscow will have to dip into its Reserve Fund, the Russian finance minister said Friday.

“About 500 billion rubles will have to be added next year to cover the [additional] expenditures,” Anton Siluanov said.

“Undoubtedly, we will have to dip into the Reserve Fund,” he added.

At the same time, the government will need to change the budget parameters in 2015 in order to account for the new economic conditions, Siluanov noted.