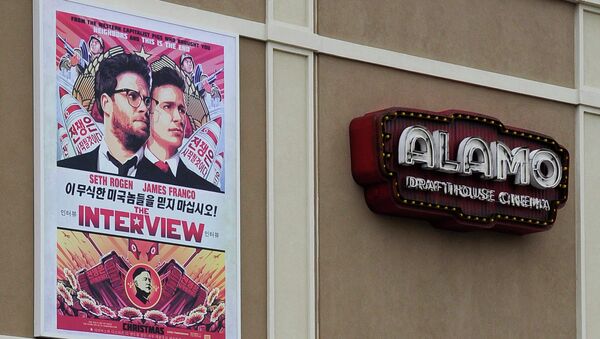 The review of the “The Interview,” the latest film from Seth Rogan and James Franco about the assassination of North Korea’s Supreme Leader and the circumstances, surrounding the movie's release.

FBI Failed to Warn Sony About Cyber Attacks: Reports
MOSCOW, December 25 (Sputnik), Samuel Mcculloch — An inquisitive Sputnik editor sat down with his family for Christmas Day eagerly to watch “The Interview,” the latest film from Seth Rogan and James Franco about the assassination of North Korea’s Supreme Leader, Kim Jong-un amidst the massive controversy, created by it in the last few weeks and gives an analysis of it and it impact.

Having just finished "The Interview," I can confirm that the controversy surrounding the movie is much more interesting than the two hour long juvenile film released today on Christmas. Personally, I can’t remember a time before when a movie has generated so much controversy, but hype is usually unfounded as is the case here. However, while the quality of the film may not be what was expected (or exactly as it was thought), the last legacy of this film will not be for its plot, but whether it will serve as a successful model for digital distribution in the future.

In the lead up to the release of the film, Sony Pictures Inc. was hacked and several terrabytes worth of data was stolen. The hack is considered to be the largest breach of security in the US ever. The scope and the nature of the attack will definitely force every major American corporation reassess their operational security and take steps to ensure what happened to Sony does not happen to them.

Sony Releases Full Movie 'The Interview' on YouTube, Other Websites
The most immediate loss was that of five feature films who were still in theaters or had yet to debut. The most prominent, Fury, a WWII movie starring Brad Pitt was downloaded more than a million times in the first hours. The movie has now seen worldwide illegal distribution. In fact, while I was flying on the plane home, I noticed that the film had already been dubbed in Russian just a few days afterwards.

Days later, emails appeared on Gawker showing a great rift between movie producer David Rudin and Angelina Jolie over her wanting David Fincher to direct the Steve Jobs biopic, who he was angry at for “the insanity and rampaging spoiled ego of [Jolie].” Also released were emails between Rudin and Chairwoman Amy Pascal showing them making racist remarks at US President Obama.

What was to be the most damaging part of the hack, however, came several days later, when the same hacker group left a message for Sony Pictures. In it they claimed the following, making the statement that “Soon all the world will see what an awful movie Sony Pictures Entertainment has made,” and “The world will be full of fear,” and “Remember the 11th of September 2001.” The last thing Sony wanted was a repeat of what happened in Colorado last year when a gunman walked into a theater killing more than 70 as retaliation for releasing the film. Thus, last week, after the four major theater groups in America decided they would not show the film, Sony decided to pull the plug on its $44 million dollar investment.

The FBI Got it Wrong? Cyber Experts Say Sony “Nuked from the Inside”
The move caused a great uproar amongst Hollywood and many politicians who came out in support of the movie. Even US President Obama came out and said the cancellation of “The Interview” was, in his opinion, “a mistake”. For several days afterwards, Sony faced untold criticism, far more than the US government released its redacted summary of the Post 9/11 torture report.

Then, suddenly, Sony reversed its decision two days ago and announced the film would see limited release in theaters and would see immediate online distribution on Youtube, Google Play, and at the website “Seetheinterview.com”.

Now that the film has opened, the greatest unintentional marketing campaign has come to an end and I guarantee many people, like myself, chose to see the movie purely to see what all the hype was about. If any of Seth Rogan’s previous films give a clue (Neighbors, Pineapple Express, This Is the End), the film is an explicative laden hodge podge of butt jokes, Katy Perry, and party montages. While there are a few funny lines, most of the film features Rogan and Franco either freaking out at each other, making tasteless jokes, Franco giving a wonderful master class on how to use his eyebrows.

The plot itself is pretty simple, Franco plays Dave Skylark, a Jeremy Kyle-esque talk show host whose primary focus for the first ten years of his career is to blow the lid on celebrity scandals; sexual, odd and some perverse. Franco’s character is actually one of the best parts of the film, he plays his character well and while extravagant, it is not overdone. Rogan plays his sidekick and producer, Aaron Rapoport, a journalist who sees the shallowness of his position and desires to engage with interviewees with more substance. Through happenstance, Skylark discovers that the great leader is a huge fan of his TV Show and by luck, Kim Jong-un agrees to go before a live TV audience. At this point the CIA comes to Skylark and Rapoport and asks them to assassinate Kim Jong-un. What happens next is your dopey buddy flick where both sides are incompetently trying to accomplish their mission. The trope is prevalent in most all of Rogan’s films and I have to say it works well here as well. Most of the jokes and scenes have good lead-ins from earlier in the dialogue and the one-liners hit most of the time. All in all, the movie will definitely be funny and appealing to the youth demographic it is targeted towards. However, I watched the movie with both my grandmother and mother and they thought the jokes were childish and said the movie would be watchable “had it not be for the constant flood of obscenities.”

If the movie had been released by itself, I’m sure it would have been a minor success. It is definitely not as good as some of Rogan’s other features, but it does stand on its own. However, the movie has been under media spotlight for several weeks now and so the scrutiny of the film has been heightened greatly.

Sony Pictures Invited to Collaborate With US Gov't After Hack: Congressman
The movie, regardless of its quality, is breaking new ground. It stands to be the first major feature to be released both in the theaters and for streaming at the same time. The digital landscape has been bringing viewers closer to this eventual outcome for some time now. TV size and quality is near what cinemas can currently offer. In recent years, theaters have had to shift the focus of their business towards 3D and IMAX films, an experience currently not matched by their home counterparts. In this respect, the 2D cinema is slowly dying. Ticket sales have been down year on year, as more people stay home to watch films on DVD, Blue-ray or nowadays, streaming services such as Netflix. The cinema today is an overpriced archaic holdover, slowly dying in the face of 4k televisions and 5.1 home surround sound.

Tonight for instance, gave me the option to watch “The Interview” on my television or laptop for 48 hours for the low price of $5.99. For this, I was able to watch the film with three other people, brining the total cost per person of watching to $1.50. If I had chosen to take my family to watch the same film in the theaters, the total cost would well exceed $10 per person, solely for the ticket alone. Now, for me, the price difference between watching the movie at home versus the theater is worth it in itself. I don’t have to deal with loud obnoxious people who talk during the movie. If someone calls I can pause it and then come back to it. I can even watch the film tomorrow (which I probably will do again). The ease and access provided by being able to stream the film from day one is paramount to any experience provided by the theater.

Before "The Interview" most movies that went straight to film were considered sub-par or poor. Now, Sony is testing the waters to see if a new precedent can be set. If the digital sales numbers for "The Interview" are up to or beyond expectations, a slow shift will start to take place in Hollywood. Movies will start to appear in digital formats sooner and sooner after their release date. In my opinion, the change will not be immediate, but a brave studio will probably start to release their films for streaming within 30-60 days. Then, as time goes along and theater sales drop more and more, direct to consumer sales will eventually outpace and overtake the bloated elderly theaters. People will be much more willing to spend $5.99 to watch a mediocre film in their own home than shell out close to $50 for the whole family to see it in theaters. Digital sales and rentals will allow a company like Sony to cut out the overpriced theaters in favor of a distribution method for the 21st century.

All of this depends on the success of “The Interview” over the next few weeks. This “Napster” moment may very well be the beginning of the end for traditional cinema as we know it and the film representative of this seismic shift will be known for its poop and butt themed jokes. It surely will be a brave new world.