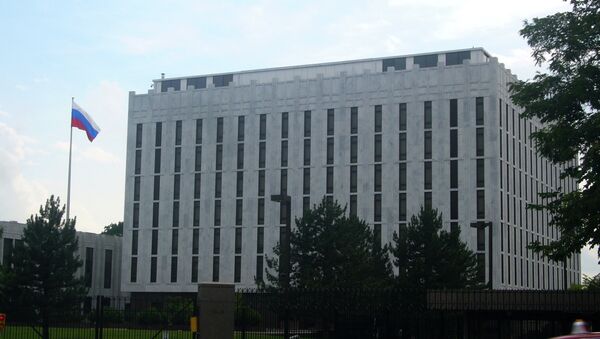 Russian Teen ‘Adopted’ by US Family on Student Exchange Yet to Come Home
WASHINGTON, December 25 (Sputnik) — The United States has stonewalled Moscow in nearly every case this year, involving rights violations of Russian children adopted in this country, a source in the Russian Embassy in Washington told Sputnik on Thursday.

"Last year's monthly consultations at the embassy were suspended on January 1, without explanation. The Americans are suggesting that the agreement [between Russia and the United States signed in 2012] is no longer valid and that the adopted children are US citizens, and hence fully subject to [US] jurisdiction. As far as we are concerned, we have been instructed to establish contact with local authorities and adoption organizations, which are avoiding contact [with us]," the source said.

According to the Russian diplomat from the legal section of the embassy, who spoke on condition of anonymity, the State Department, Department of Justice and other US agencies severed contact on all contentious adoption cases for the past year and established a so-called "information blockade" with the Russian Embassy and Consulates in the United States.

Russia
Russia Asks US to Probe Alleged Adopted Child Rights Abuses
"That is why there is this information vacuum," the diplomat said, adding that "American NGOs are more helpful than government agencies in resolving individual questions."

The source also said that out of 62,000 children legally adopted by US citizens, 40 percent were not registered with the consular department, despite this being "a mandatory requirement for adoption."

"This means that the consulate still has no information on the condition and adoption status of almost half the children," the diplomat concluded.

Adoption of Russian children by US citizens is prohibited by the so-called "Dima Yakovlev Law," named in memory of the two-year-old Russian toddler killed by his adoptive father by leaving him strapped inside a heated car in hot weather for nine hours. The law also commemorates all Russian children who were killed or injured at the hands of their foster parents in the United States.