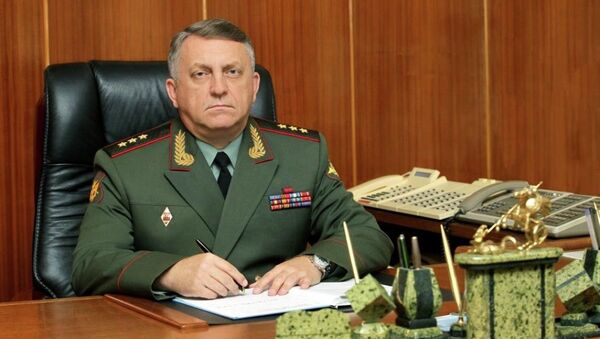 According to the Commander of Russia's Strategic Missile Forces, Russia's new-generation strategic ballistic missile RS-26 are currently being tested and is planned to be put on combat duty in 2016.

"Tests of the RS-26 ballistic missile are still underway. We are planning to complete them next year and begin putting the missile on combat duty in 2016," Karakayev told RIA Novosti.

Russia Not to Deploy Units of Strategic Missile Forces in Crimea: Commander
RS-26, dubbed Rubezh, is a solid propellant missile with an estimated range of 5,800 kilometers (about 3,600 miles). According to open sources, as of January 2014, the SMF is estimated to have 311 operational ballistic missile systems of five different types.

According to Western experts, Russia is attempting to fill the gap in its medium-range missile capabilities, which resulted from the 1987 Intermediate-Range Nuclear Forces Treaty (INF) that eliminated ground-launched ballistic and cruise missiles with ranges between 500 kilometers (300 miles) and 5,500 kilometers (3,400 miles).

Earlier in December, Russian President Vladimir Putin emphasized the importance of maintaining the country's nuclear deterrence capability, citing a growing number of security challenges, including the controversial US global missile shield, with some of its elements deployed in eastern Europe.