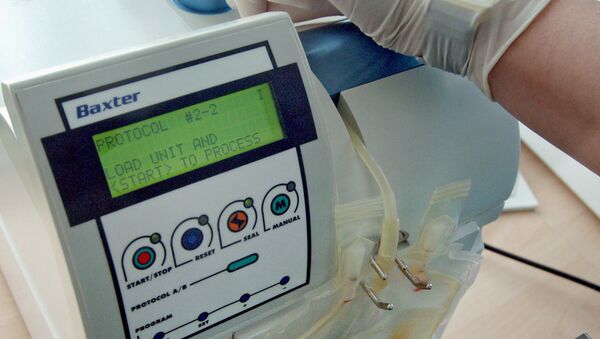 Many medical professionals and civil rights activists believe the inability of gay and bisexual men to donate blood is an outdated homophobic practice. It is based on a mixture of fear, ignorance, and prejudice.

MOSCOW, December 25 (Sputnik) – Gay and bisexual men in the United States will finally be allowed to donate blood, as the US Food and Drug Administration (FDA) decided to ease on a lifetime ban imposed during the early 1980s. However, some restrictions will still apply, as men, who wish to become blood donors, but have had sex with another men, will have to refrain from having sex with men for at least one year, according to Reuters.

US to Ease Lifetime Ban on Blood Donations From Gay Men
In the United States, potential blood donors need to go through a series of questionnaires, which for men include a question about potential blood donors' sexual orientation. Gay men have been viewed as the high-risk HIV group, and therefore, permanently banned from donating blood. However, according to estimates from the World Health Organization (WHO) and UNAIDS, women comprise half of people living with HIV. Globally, the proportion of women living with HIV has been increasing in the last decade.

The FDA’s move to potentially align the policy for gay men with that for other individuals, who are at risk for HIV infection, is a significant step forward. However, some believe that the United States still lags behind on the issue, holding heterosexual individuals and gay men to different standards. Many medical professionals and gay right activists think the practice is outdated and discriminatory.

The Huffington Post described the inability of gay men to donate blood is a homophobic practice, and said that it was based on a mixture of fear, ignorance, and prejudice.

US Could Cancel Life Ban on Blood Donations From Homosexual Men
Restricting gay men from having sex for a year, before they could donate blood is not based on any science, and is discriminatory, said Judith Aberg, a health expert from the Icahn School of Medicine at Mount Sinai, as cited by Reuters.

America is not the only country to introduce the restrictive measures against gay blood donors. Russian laws classify homosexuals and sex workers as the high-risk individuals, who are more likely to be infected with HIV and other viruses transmitted through sex, including syphilis and hepatitis B and C.

Before donating blood, Russians fill in a questionnaire about their current medical condition, regardless of their gender and sexual orientation, an expert from the Moscow State Medical University told Sputnik. However, potential blood donors in Russia are not asked about their sexual orientation and other private matters regarding their sexual life. He also added that restrictions on donors, also known as "deferrals", based on sexual orientation are extremely rare, and have never happened during his 15-year long career. When blood is collected from donors, it goes through a complex process of examination to ensure it is free from HIV or any other diseases.

Medical safety is extremely important when dealing with blood or organ donations. However, modern science has proved when someone wants to become a blood donor what really matters is the state of a person's health, not his sexual orientation.