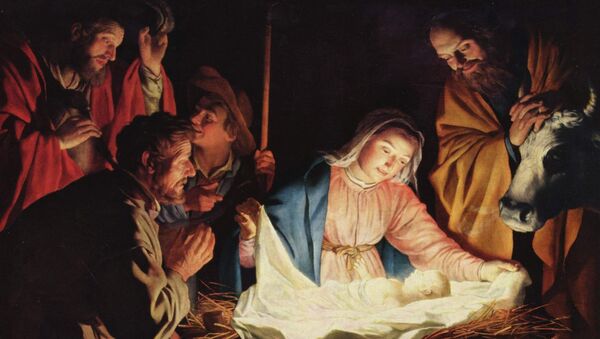 A schoolboy from St. Petersburg played the role of the Biblical character Joseph dressed as Joseph Stalin. The story has gone viral among Russian internet users after the boy's father published the story on his Facebook page.

MOSCOW, December 25 (Sputnik) – A schoolboy from St. Petersburg mistakenly played the role of the Biblical character Joseph dressed as quite another character, Joseph Stalin, the boy’s father, Fedor Gavrichenko wrote on his Facebook account.

“Yesterday, my 12-year old son participated in a school play. Earlier, he said he had a role of Joseph Stalin, who had to say something to some woman. We were not surprised too much, as over the years he played a variety of roles at school plays, including an epic role of a watermelon,” Gavrichenko wrote.

Post by Fedor Gavrichenko.
The boy's parents went the extra mile to prepare for the role: sewed military-looking braids onto the pants, found army-officer’s boots, a coat with the marshal-general’s shoulder marks and finished the costume with the loving touch of a thick moustache.
Right before the spectacle, the boy’s father found out that his son was not playing Joseph Stalin after all, as he had previously thought, but the Biblical character Joseph, who in the play was supposed to reveal the good news to the Virgin Mary. With no time left to change the costume, the boy went on stage wearing the Joseph Stalin costume and told the Virgin Mary that she had been blessed with a divine baby, after the Holy Spirit had entered her body.

The schoolboy’s confusion about the character resulted in a scene in which the Virgin Mary heard news that she had received blessing from God and became pregnant with a baby from none other than Joseph Stalin. Quite an incredible story twist from the school play has gone viral among Russian internet users after the boy’s father published a post on his Facebook account and posted his son’s picture, wearing the Joseph Stalin costume.

The original Biblical story depicts the angel Gabriel as God’s chief messenger angel. Joseph was Mary’s husband, not the messenger.