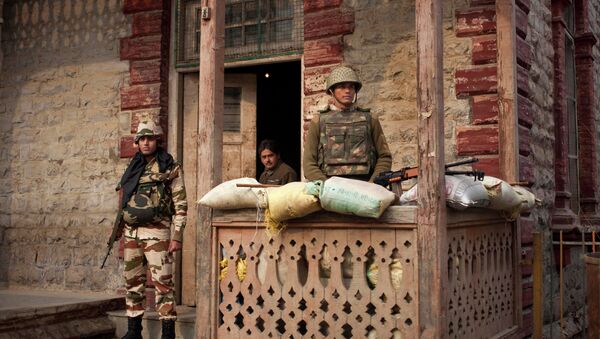 © AP Photo / Dar Yasin
Subscribe
Indian authorities announced the deployment of an additional 5,000 paramilitary troops to Assam, where a series of attacks carried out by the insurgents of the National Democratic Front of Bodoland (NDFB) on Tuesday, December 23, resulted in the deaths of 70 people.

MOSCOW, December 25 (Sputnik), Ekaterina Blinova –  Indian authorities announced the deployment of an additional 5,000 paramilitary troops to Assam, where a series of attacks carried out by the insurgents of the National Democratic Front of Bodoland (NDFB) on Tuesday, December 23, resulted in the deaths of 70 people.

"This is a blatant attack in a situation where it is not expected. The attack is on innocent people and the location of the attack in very remote and rural area," Minister of State for Home Kiren Rijiju stated, as quoted by the Indian Express, an English-language Indian media outlet.

Indian authorities strongly condemned the assault and claimed paramilitary forces had already been deplyed to the spot.

Killing of innocent people in Sonitpur & Kokrajhar is an act of cowardice. Our thoughts & prayers are with the families of the deceased.

The Centre is monitoring the situation in Assam and the paramilitary forces have been rushed to the spot.

The killing of innocent people by militants in Assam is highly condemnable. Militancy must be crushed ruthlessly & rights be protected.

The NDFB, a military separatist group, seeks the establishment of a sovereign Bodoland for Bodo people in Assam. Formed in 1986, the group has repeatedly conducted armed attacks against non-Bodo civilians and security servicemen. Two years ago, a violent ethnic conflict in the region forced an estimated 300,000 people to flee their homes.

"It is very difficult to give a reason why these people were attacked. These are innocent people. Women and children. They are not fighting with them, they are not opposing them. What is this? Heroism?" said Tarun Gogoi, the chief minister of Assam, as quoted by the New York Times.

The media outlet elaborates, citing L.R. Bishnoi, the police chief of the town of Kokrajhar, that the attack could have been triggered by the "recent government raids on Bodo strongholds that resulted in the deaths of 42 fighters and the arrests of 175."

The residents of the areas hit by sudden assaults fear that the violence may increase and many of them have begun to flee from the region.

"People are very much under fear. The situation is very tense. Today, the violence spread into new areas. Tribals are under attack," said Bir Singh Munda, a member of the tribal group.

"The killing of innocent people by militants in Assam is highly condemnable. Militancy must be crushed ruthlessly & rights be protected," Arun Jaitley, the Minister of Finance of India stressed in his Twitter.