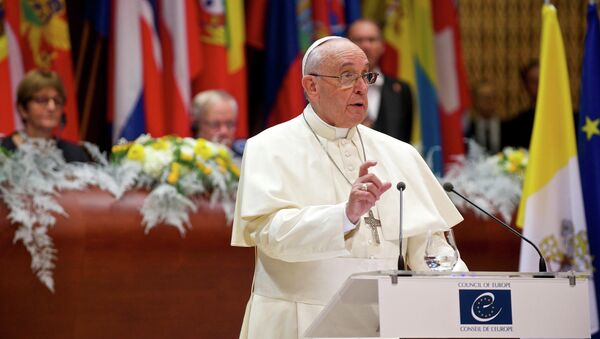 © REUTERS / Sandro Weltin/Council of Europe/Handout via Reuters
Subscribe
During his November visit to Istanbul, Pope Francis stated that he is ready to meet with the head of the Russian Orthodox Church. The Moscow Patriarchate then said that the actions of the Ukrainian Greek Catholic Church might hamper the historic meeting.

MOSCOW, December 25 (Sputnik) — A meeting between Pope Francis and Patriarch Kirill, head of the Russian Orthodox Church, is possible, the metropolitan archbishop of the Roman Catholic Archdiocese of Mother of God in Moscow told RIA Novosti on Thursday.

Archbishop Pavel Pezzi congratulated everyone who celebrates Christmas on December 25 and made a wish for the meeting between Pope Francis and Patriarch Kirill to take place next year "here in Russia."

"I think that this meeting is possible. It is possible here, in Russia, or in Rome or in any other city of the world. We are all well aware that it would take certain courage and the will to overcome the obstacles between the sides," Pezzi said.

Pezzi, however, stated that a comprehensive dialogue between the Catholic and Orthodox churches could help overcome these obstacles.

"A more intense dialogue is needed, so that each side would be able to openly state its position and express its views and concerns," Pezzi said.

Pope Francis Expresses Solidarity With Christians Driven From Middle East
The cleric noted that in recent years the dialogue between the two churches has entered a new and deeper level.

"Of course, problems and obstacles remain but there is a lot more of sincere will [for the dialogue] when there was before… I also see the emergence of the opportunities for joint activities: there is clear understanding that we can and should fight for Christian values together," Pezzi said.

The archbishop was born in the Italian town of Russi on August 8, 1960. He visited Russia for the first time in 1991, following an invitation from a Russian Catholic priest in the city of Novosibirsk. He traveled to Russia again in 1993 and stayed there for five years before moving back to the country in 2003.