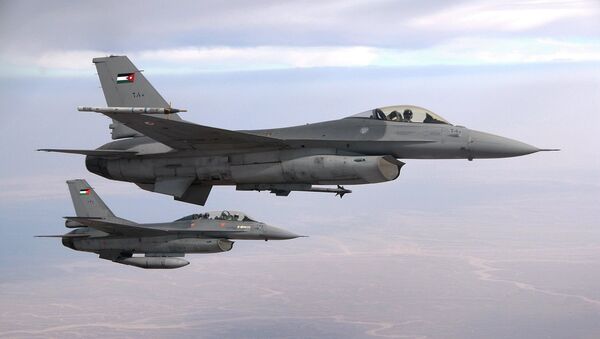 A Jordanian F-16 was downed in Syria on Wednesday, with ISIL claiming responsibility for the crash after capturing its pilot. The US, however, refutes that the terrorist group shot it down, but did not offer any other details about its version of events.

Jordan is part of the so-called ‘anti-ISIL coalition’ (better described as the ‘regime change coalition’ [RCC]) that has been bombing the terrorists’ positions in Syria since September, and the loss of its warplane represents the first of its kind for the RCC since the operation began. Details are murky about what really transpired, though, with Jordan claiming that “ground fire” took it down, while ISIL insists that it was to blame. No matter which version is correct, both have startling implications for revving up the War on Syria and introducing either an expanded air campaign and/or possible ground troops into the country in order to sabotage next month’s Inter-Syrian Dialogue in Moscow.

If the terrorists were responsible for taking down the jet, they would likely have used some kind of heat-seeking ground-to-air missile, as they’ve stated on social media. Although it’s lately been suspected that terrorists may have these armaments (likely acquired from Libya in the aftermath of the ruinous NATO war there), this would be the first time they’ve used them to down a military aircraft. Taking it a step further, if they could down a military jet flying at high altitudes, then the reasoning would go that they could even more easily hit a civilian aircraft that’s about to land at an airport. This, not the downing of the Jordanian jet itself, is what could be used as the justification for expanding the external use of military force in the country.

The US and its RCC followers could predictably make the case that ISIL needs to be immediately defeated before they use their heat-seeking missiles against civilian jets. Although the Syrian Arab Army (SAA) is fighting tooth and nail to win the war, they’ve had to focus on multiple fronts simultaneously in order to stem the spread of terrorism. This means that until terrorism is cleansed from the north and south, it is not likely that the SAA will risk leaving Damascus and other major population centers vulnerable to attack in order to redirect all of their attention eastwards against ISIL. Thus, the Western mainstream narrative may argue that the RCC must either expand their bombing campaign and/or deploy extra special forces to disarm ISIL of these weapons and possibly carry out a rescue attempt to free the captive pilot. Both options can then easily be redirected towards furthering regime change goals in the country at any time afterwards, including via a (false-flag) provocation against the SAA.

Other than the ISIL scenario, there remains the possibility that the RCC may try to pin the jet’s downing on the SAA, owing to Jordanian claims that “ground fire” was responsible and the US’ ambiguity to yet state what it believes to be the cause (other than flat-out denying that it was ISIL). Should the mainstream narrative go down this path, then it would most certainly precipitate a call for retaliation, most probably in the form of bombing all of the SAA’s anti-aircraft units (incidentally, the precursor towards enacting a ‘no-fly zone’) and perhaps seamlessly seguing into an all-out bombing campaign against government forces and territory (including civilian-populated). Afterwards, this could predictably be followed by some form of ground intervention into Syria to strengthen the anti-government forces and assist them in overthrowing the state.

This scenario is contingent on the cohesiveness of the RCC, which appears to be quite divided at the moment over many factors, with resource and responsibility allocation being first and foremost among them. Nonetheless, they may find a quick compromise in order to move forward with their plans since such an ‘opportunity’ doesn’t come often, but then again, there’s always the possibility that they will let it slide and not exploit it due to their internal divisions that may hinder any escalation’s military success. Anyhow, it must once more be emphasized that what’s important is not what actually happened (whether it was ISIL or the SAA that downed the jet), but rather how it is sold to the mainstream media and global public. One need only recall the absolutely false reporting about the Ghouta chemical weapons attack to see how influential the US’ ‘official’ take on a situation can be in bringing the world to the brink of war.

It doesn’t matter which version of events the RCC promotes across the world, since the end intent is to overthrow the Syrian government, using whichever crisis necessary to advance this goal. If there ever was a ‘time for a crisis’, it’s now, since the Inter-Syrian Dialogue (also called Moscow I) is set to tentatively begin next month. This diplomatic endeavor sees Moscow acting as the peacemaker in bringing together the legitimate, democratically elected government and the non-terrorist anti-government opposition (NTAGO) to engage in talks without preconditioned Western and external involvement (which was the reason why Geneva I and II failed).

The RCC isn’t too happy about the prospects of Moscow I taking place, going as far as to launch a preemptive information campaign against the talks before they were even announced. Prior to Syrian Foreign Minister Walid Muallem’s Sochi visit at the end of November to meet with Putin and Lavrov, even Reuters (the seemingly ‘neutral’ news agency) jumped in on the action by headlining that “Russia's new push for Syria dialogue unlikely to be fruitful.” They couldn’t have been more wrong on this, since the Sochi meeting bore the fruit of Moscow I, which is now moving ahead at full speed. Time is running out for the RCC and they know it, hence why now may be the moment that they choose to intensify their pressure on Syria in order to sabotage Moscow I before it has a chance of meeting and succeeding.