Iraq to Demand US Explanation Over Delayed F-16 Deliveries 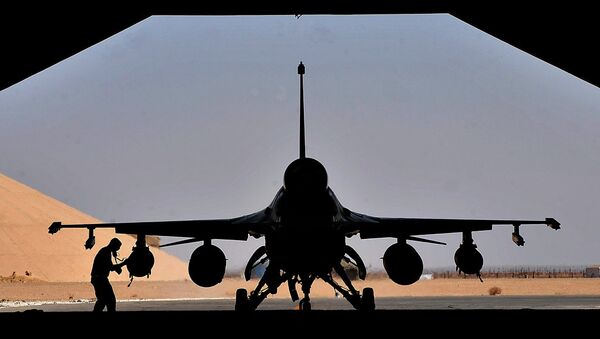 Iraq will make the United States explain why the delivery of F-16 fighter jets which Baghdad plans to use against Islamic State (IS) insurgents has been delayed.

US Approves $3 Billion Sale of Tanks, Armored Vehicles to Iraq
BAGHDAD, December 24 (Sputnik) – Iraq will compel the United States to explain why it has delayed the delivery of F-16 fighter jets which Baghdad plans to use against Islamic State (IS) insurgents, a member of the Iraqi parliament's security and defense committee told a local news agency Wednesday.

"Iraq is suffering heavy losses in clashes with Daesh [IS] militants, while America keeps postponing the delivery of F-16 planes", Iskandar Watout was cited as saying by the Iraqi Media Network (IMN).

US Decision to Form Anti-IS Coalition Taken Too Late: Iraqi FM
The Pentagon said in early September it could delay arms deliveries to the Baghdad government after it had to evacuate a joint Balad airbase near the Iraqi capital due to the threat posed by advancing IS troops.

But Watout said the parliament's defense committee was now discussing a request for a formal explanation from Washington, which has contractual obligations to supply Iraqi forces with small arms, warplanes, tanks, armored vehicles and Apache helicopters worth billions of dollars.

"Our government should stop buying warplanes and equipment from just one source," Watout added. This comes after Iraq received the first batch of Russia's Su-25 fighter jets in June.

Contracts to arm and train Iraqi security forces were signed within the framework of a 2008 strategic partnership agreement between Iraq and the United States back in 2008. Hakim al-Zamili, an Iraqi lawmaker who heads the security and defense committee, earlier threatened the Pentagon with international litigation to secure the return of the money Baghdad paid for US arms deliveries.