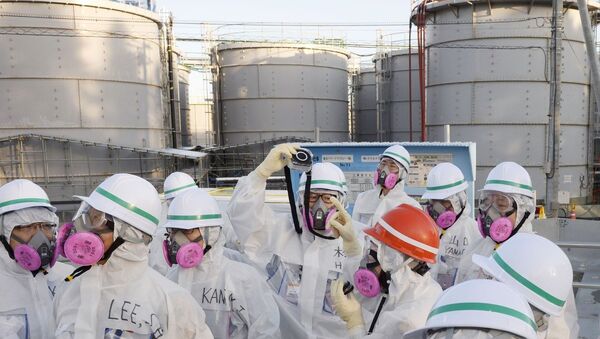 © East News / Kyodo/FOTOLINK
Subscribe
The mutations in around one third of the Fukushima butterflies were detected in the first few months following the disaster, including smaller wings and assymetrical antennae.

Over 3,700 Fukushima Evacuees Yet to Claim Compensation: TEPCO
MOSCOW, December 24 (Sputnik) — Abnormalities detected in butterflies in Japan's Fukushima show that the impact of the 2011 nuclear disaster continues to cause environmental damage, Deutsche Welle reported.

Joji Otaki from the Japanese University of Ryukyus said that the 2011 Fukushima disaster aftermath has left neither the local people nor butterflies in a favorable state, as quoted by the news outlet on Tuesday.

Otaki made the statement following multiple research trips to the nuclear site since the incident happened. The mutations in around one third of the Fukushima butterflies were detected in the first few months following the disaster by Otaki and his team, including smaller wings and assymetrical antennae, according to Deutsche Welle. The mutations, the scientist said, have become more pronounced over time.

Contaminated Water Hampers Fukushima Cleanup Process
The news outlet added that butterflies are not the only animals that have been affected by the radiation. The fur of cattle and the feathers of swallows in the site have also revealed abnormalities, such as white spots.

Timothy Mousseau, an American biologist, told Deutsche Welle that "the bird abundances and the bird biodiversity shows major declines in the areas of high radiation," and Fukushima is not an exception.

The Fukushima nuclear failure and subsequent release of radioactive materials into the atmosphere and groundwater occurred in March 2011. The disaster is reported to be the largest nuclear incident since the Chernobyl disaster.

The accident occurred when a 46-foot tsunami caused by a 9.0-magnitude earthquake hit the Fukushima Daiichi nuclear plant. The incident displaced around 160,000 people, and caused several of the plant's reactors to melt down, causing a major leakage of radioactive materials.