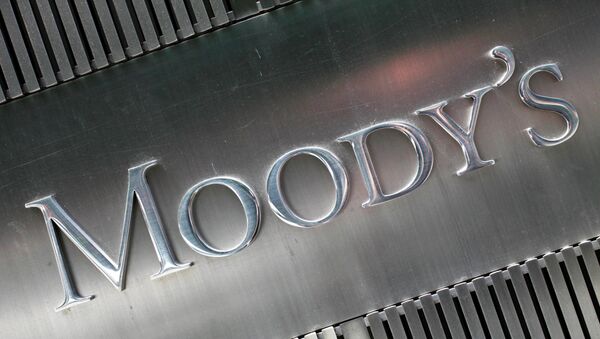 Moody's said Tuesday it had downgraded the foreign currency rating of Russia's energy giant to Baa2 from Baa1.

"This action reflects the ongoing severe and rapid deterioration in the operating environment in Russia and the heightened risk of a more prolonged and more acute economic downturn than originally anticipated," Moody's said in a statement.

Moody's added that the decision also reflects "recent volatility in the rouble exchange rate, which has surpassed the heightened levels already experienced in 2014."

The agency also said it had put 45 Russian non-financial corporates and their subsidiaries on review for a downgrade, warning that even companies without refinancing needs in foreign currency could be weakened in a severely deteriorated operating environment.

At the same time, Moody’s acknowledged the strength of Gazprom’s franchise, saying the agency could yet stabilize the outlook on the gas giant’s ratings if the outlook on Russia's government bond rating stabilized as well.

Gazprom to Cut Expenses by $238Mln for Optimization in 2015: Board

The Russian national currency has contracted by more than half of its value to dollar since July due to the falling global oil prices and Western economic sanctions, prompting the head of the country’s Central Bank to predict a 10-percent inflation rate in 2014, as well as in the first quarter of 2015.

Earlier this month, the Central Bank hiked interest rates first to 10.5 percent from 9.5, and just a while later to 11.5 percentage points in an effort to stabilize the ruble, also this measure had but a limited effect on the depreciating currency.