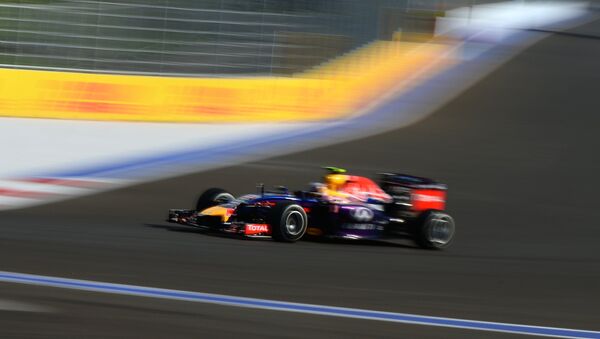 The future of Italy's Formula 1 Grand Prix is vague due to the recently passed budget for upcoming year.

Italy’s Prime Minister Announces Rome Will Bid to Host 2024 Summer Olympics
MOSCOW, December 23 (Sputnik) — The future of Italy's Formula 1 Grand Prix is up in the air due to the passage of the 2015 Italian budget that revokes the tax exemptions previously enjoyed by the historic race track, R-Sport reported Tuesday.

"The Stability Law taxes the Monza race track and jeopardizes the future of F1 Grand Prix," Fabrizio Sala, an official at Expo 2015, was quoted as saying by the news outlet.

On Monday, the Italian Parliament passed the so-called Stability Law, envisaging 16-billion-euro ($19.5 billion) spending cuts and anti-tax evasion measures worth 10.5 billion euros ($12.8 billion). The law was designed to fall in line with the EU Stability and Growth Pact, which aims to promote fiscal discipline in the European Union and maintain member-states' deficits at below 3 percent of gross domestic product (GDP).

However, the tax cuts totaling 18 billion euros ($22 billion) failed to include an exemption for the Grand Prix. According to R-Sport, the new budget omits an amendment that has previously exempted organizers of the race from paying taxes to the tune of about 20 million euros ($24.5 million).

The Italian Grand Prix is one of the oldest circuits in Formula 1 with races held at the Monza road circuit annually since the inaugural season 64 years ago, the only exception being 1980 when it was held at Imola. The current Italian Grand Prix deal runs through 2016.