What’s The Hold-up? Fate of Remaining Brit at Gitmo in Limbo 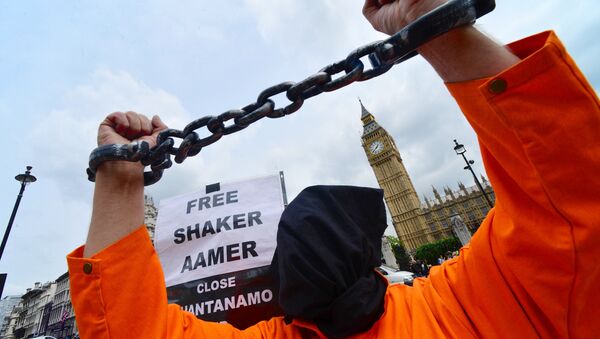 Amid reports of UK complicity in US torture of terror suspects, campaigners are stepping up their calls for Shaker Aamer, a British citizen held at the US Guantanamo base, to be returned to his family in London by the end of this month.

Shaker Aamer has been held at the US detention centre in Guantanamo, Cuba, for 13 years without having been convicted of any crime.

"[British Prime Minister] David Cameron is apparently going to stay at the White House in mid-January and he should make sure that Shaker is home with his wife and family by then," Mr Aamer's lawyer in the US, Clive Stafford Smith, told Sputnik News. "If he can't guarantee that, it's not much of a ‘special relationship' and he simply shouldn't go."

He was referring to the historically close alliance between the US and Britain, now being severely tested by the US Senate's heavily-redacted report on the CIA's torture programmes which was released earlier this month, sparking concerns over the level of British involvement.

Mr Aamer, whose British wife and four teenage children live in London, was taken to Guantanamo in February 2002. He has never been charged with or convicted of any crime and he was cleared for release in 2007 and 2009.

"There's no reason why he shouldn't come home," says Stafford Smith. "Britain has the best record in terms of prisoners from Guantanamo — 16 have been released home, with no subsequent criminal offences. Shaker should be on a ‘plane tomorrow."

So what's the hold-up?

In October 2013, David Cameron said Aamer's case was a "high priority" and that "the UK government wants him released and returned to the UK as a matter of urgency."

In December 2014, the British Foreign Office told Sputnik News that: "Mr Aamer's case remains a high priority for the UK Government and we continue to make clear to the US that we want him released and returned to the UK as a matter of urgency. The FCO spokesperson added that:  "Any decision regarding Mr Aamer's release ultimately remains in the hands of the United States Government."

This approach of leaving it to the US government is one that is being more vigorously challenged than ever this month, with increased calls for his release marking Aamer's December 21 birthday, the publication of a letter of support signed by a range of British public figures, and the conservative Daily Mail newspaper taking up the cause — all coming in the wake of the US Senate's torture report.

"They're not releasing him because he knows too much about US and British government activities," says Stafford Smith.

Aamer was one of the first five prisoners post 9/11 in the US detention centre at Bagram in Afghanistan, where Ibn al-Shaykh al-Libi — believed by the CIA to be high up in al-Qaeda — was also held, he explains. The CIA took al-Libi to Egypt in a coffin, where they used torture to extort a ‘confession' that linked Saddam Hussein to al-Qaeda and weapons of mass destruction — arguments used to launch the invasion of Iraq in 2003.

"He knows too much"

In the Senate's torture report, the only reference to this most heinous example of torture, which elicited a false confession that led to war and the deaths of hundreds of thousands, is found in footnote No 857, says Stafford Smith.

The question now, he believes, is how serious the British government is about getting Aamer released. "Some politicians are serious about it. The people in Britain who are stabbing him in the back are those associated with [secret service] MI6. I'm trying to get the government to get a straight answer from MI6."

The Cameron government also has leverage, he says. "They got what they wanted — there were 20 trips by British politicians to the US to make sure there was no reference to Britain in the torture report, and there wasn't." The only issue is whether the UK government is prepared to use that "political leverage", he says.

Pick up the phone, Mr Cameron

On December 14, the Daily Mail published a letter signed by MPs, campaigners and celebrities in which they pointed to the ‘special relationship' between the United States and the UK, and called on Mr Cameron "to pick up the phone to [US] President Obama, and to bring Shaker Aamer home."

Addressing speculation that the US would rather send Aamer back to Saudi Arabia, where he was born, than to Britain, the letter published in the Daily Mail said this would be "convenient" for the US as it would leave him "unable to talk about the torture and abuse he has witnessed and personally experienced".

However, what the US government wants is not relevant, the letter said, because the British government "has a non-negotiable responsibility to secure the return of Mr Aamer, given his status as a legal British resident."

"It used to be that you were innocent until proven guilty. Lyndsey German of the Stop the War coalition in the UK told Sputnik News. "Not only is that not the case in Guantanamo, but there seems to be absolutely no limit to the length of sentence.

"It's a complete disgrace that the British have always gone along with this. They're obviously embarrassed by it, but they're more prepared to go along with what the Americans want than to stand up for people who live in this country."

She says that "the fact the Daily Mail's taken it up may have some impact on the Conservative Party, given that it's usually one of their close supporters.

"It shows how much discontent there is with this particular imprisonment."