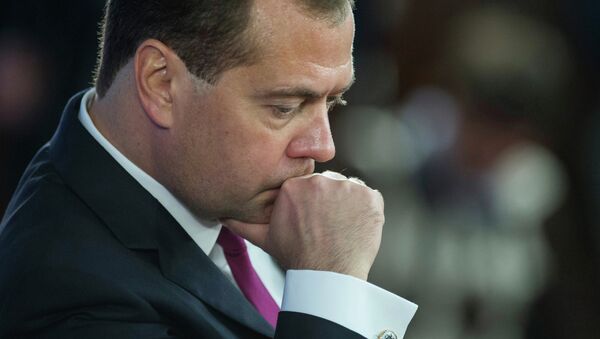 © Sputnik / Sergey Guneev
/
Go to the photo bank
Subscribe
Russian Prime Minister stated on his Facebook page that the Ukraine Freedom Support Act, signed by the US President Barack Obama last Thursday will mar the US-Russia relations for decades.

“The US president signed an anti-Russian law, which authorizes any US president to impose sanctions on our country at any time. Just as it was in case with Jackson-Vanik amendment, our relations with the United States will be marred for decades,” Medvedev posted on Facebook Monday.

Medvedev added that the legislation would have a negative impact and Russia would have to react to it.

What is Ukraine Freedom Act, and What Does It Imply?
The Ukraine Freedom Support Act was signed into law by the US president last Thursday following the approval by the US Congress. The legislation authorizes the provision of lethal military assistance to Ukraine, as well as contains provisions on a new round of economic sanctions against Russia.

However, Barack Obama said the United States did not intend to impose sanctions under the law at the time.

Russian Foreign Ministry said the law had nothing in common with freedom support and just created a legal foundation for US course of undermining relations with Russia.