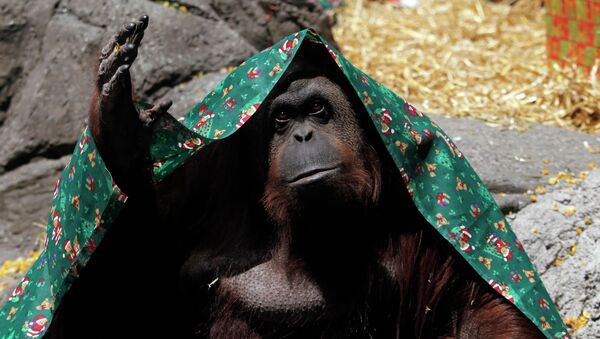 Like any other living being with “proven cognitive ability,” Sandra, a Sumatran Orangutan, will have the human right to liberty after being in captivity for more than 20 years at an Argentinian zoo.

The Argentinian court will recognize Sandra as a “non-human” person allowing her release to a nature sanctuary in Brazil. The “habeas corpus” ruling was requested by the Association of Professional Lawyers for Animal Rights (AFADA). Brazilian authorities have 10 days to petition against her release.

A habeas corpus is usually filed to challenge a human person’s detention. The decision is regarded as a big win for animal rights groups who have long tried to use this legal entitlement to release wild animals from detention.  Prior to Sandra’s release, two other lawsuits attempted to use a similar challenge in New York and San Diego.

Both rulings were thrown out.

Tommy the chimpanzee was privately owned in New York State, but the court ruled this month that he should not be regarded as a person. A San Diego court also dismissed a lawsuit against SeaWorld after five whales were allegedly captured and treated like “slaves.”

What makes Sandra’s case exceptional is the plausibility of the argument. Lawyers said Sandra “had proven cognitive ability.” Like a human being, Sandra has the ability to reason and is capable of emotional ties considering the frustration of her confinement.

Adrian Sestelo, who is head of biology at Buenos Aires Zoo, challenged that theory indicating that orangutans “are naturally solitary animals.”

“When you don’t know the biology of a species, to unjustifiably claim it suffers abuse, is stressed or depressed, is to make one of man’s most common mistakes, which is to humanise animal behaviour,” he told Argentinian newspaper, La Nacion.

Sandra arrived at the Buenos Aires zoo in 1994 after a stint in captivity in Germany. Belonging to the most endangered orangutan species of orangutan, Sandra is just one among the many Great Apes who are losing their natural habitats because of human settlements. She turned 29 in February.

"This opens the way not only for other Great Apes, but also for other sentient beings which are unfairly and arbitrarily deprived of their liberty in zoos, circuses, water parks and scientific laboratories," Buompadre said.