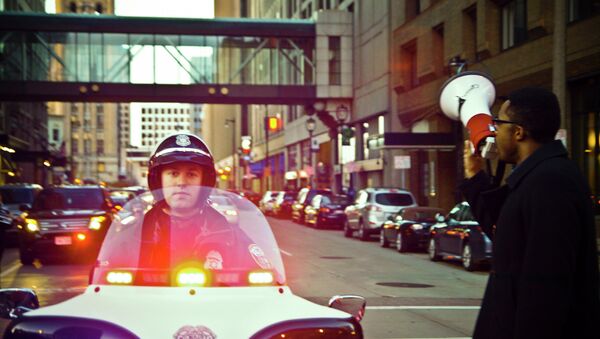 © Flickr / Light Brigading
Subscribe
Following weekend protests in Milwaukee over the police shooting of an unarmed black man there, the district attorney announced Monday that the officer involved in the shooting will not face charges.

The Milwaukee County District Attorney said that Officer Christopher Manney, who was fired from the police force on October 15 for failing to follow police policies when addressing the mentally ill, was acting in self-defense when he fatally shot Dontre Hamilton.

DA John Chisholm said that “after reviewing all the evidence, I believe there can be little serious doubt that P.O. Manney was justified in firing at Dontre Hamilton, who was attacking him with a deadly weapon.”

A local Starbucks had called police to complain about Hamilton sleeping in Red Arrow Park on April 30. Two officers responded to the call, but left Hamilton alone when they determined he was not breaking the law. Manney, the beat officer in the area, approached Hamilton separately.

Police say that Officer Manney came up behind Hamilton as he slept and placed his hands on his chest to begin frisking him. Hamilton then took Manney’s baton and then began to strike the officer with it. Manney responded by opening fire, shooting Hamilton 14 times. Hamilton had a history of mental illness.

Manney’s statement, released along with the announcement, reads:

“Manney fired his weapon but it did not seem to have any effect on Hamilton, so he continued to fire while walking backwards from Hamilton. Hamilton fell forward and Manney continued to fire because he perceived Hamilton still to be a threat. He stopped firing when Hamilton was completely on the ground.”

An autopsy report released by the Hamilton family’s attorney states that 21 gunshot wounds were found on the body, including entry and exit wounds. A toxicology report found no drugs in Hamilton’s system.

Manney was fired from the police department earlier this year for failure to follow department procedures leading up to the shooting. Police Chief Edward Flynn described Manney’s actions as an “out of policy pat-down,” and said Manney acted because of his own preconceptions about the mentally ill and homeless.

While peaceful protests have occurred regularly since the April 30 shooting, 74 people were arrested on Friday as demonstrations blocked rush hour traffic along Interstate 43. Protests had intensified in anticipation of Monday’s decision.

Among the protesters was Hamilton’s brother, Nate, who was quoted on Friday as saying, “You know, I’m sorry that we cause you a small convenience. It’s to make sure that no family has to go through what we’re going through right now.”

He also added that he wished the prosecutor would wait one more week to announce the decision. “I don’t want to have to bear that type of decision before Christmas – nor my mom.”

Milwaukee Sheriff David Clarke said that protesters’ frustration is understandable, and that the delay in a decision has had “a destructive effect on the rest of Milwaukee County.”

The decision not to prosecute is the latest in a series that have sparked nationwide debate about police accountability, following similar rulings that looked into the deaths of Michael Brown and Eric Garner.

Over 20 demonstrators were also arrested during a “Black Lives Matter” protest inside Mall of America in Minnesota on Saturday. Mall of America released a statement saying they were “extremely disappointed” that protesters ignored their policies against political demonstrations.

In response to the DA’s decision, the Wisconsin chapter of the American Civil Liberties Union released a statement asking, “If Officer Christopher Manney did not violate the law, then is anyone legally responsible for Mr. Hamilton’s death? Does the criminal law protect individuals like Mr. Hamilton from deadly force exercise by police officers?”