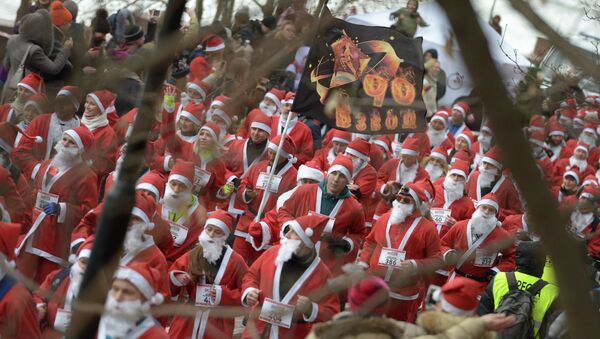 A large collection of Russian Santa Clauses has taken up the task of getting Russians from all across the country into the holiday mood.

MOSCOW, December 21 (Sputnik) — In preparation for the New Year holiday, Russian Santa Clauses – known as Father Frost, are cheering up Russians and getting them into the holiday spirit, individually, in small groups, and in whole armies.

In Moscow, Father Frost launched the countdown timer to the end of the year on Sunday evening on a media façade lighting up the Ostankino Television Tower. The display shows the number of days, hours, minutes and seconds left on the clock for 2014, and will be seen by millions of Muscovites and visitors to the capital, television channel Zvezda reported.

Meanwhile, in another part of the city, hundreds of Russian Santa Clauses gathered for a charity run through Gorky Park, collecting over 500,000 rubles towards the worthy cause of purchasing gifts for good little boys and girls who are sick this holiday season, Komsomolskaya Pravda reported. Some of the Santas decided to go without the beard…It was an unseasonably hot day in Moscow today, a 2-3 degrees Celsius.

In St. Petersburg, Father Frost came by to officially kick off the New Year celebrations in the northern capital, starting off by visiting several local children’s hospitals. The children had long awaited his arrival, writing him letters, and reciting poetry for him which they had prepared for his arrival. Later on, Father Frost joined several hundred children and their parents on Palace Square in the city center to light up the city’s main Christmas tree, shouting, “Christmas Tree oh Christmas Tree, light up!” Channel 5 explained.

In the southwestern city of Krasnodar, over 450 Father Frosts held a parade and festival entitled “Invasion of the Father Frosts”. For the third year in a row the bearded magicians gather from across the Kuban region, hundreds of them joining in a colorful parade featuring banners and music stretching from Puskhin Square along the city’s main street of Krasnaya to the Gorky Drama Theatre. A dance then ensued around the city’s main Christmas Tree. The festival included a series of competitions. In one, Father Frost needed to build a Leaning Tower of Pisa out of presents scattered around the ground as quickly as possible; in another, Frosts competed to see who could make the best paper snowflake, being given only one minute to do so. The Frosts also played soccer and took part in archery competitions, Rossiyskaya Gazeta reported.

The western city of Voronezh held a similar parade, featuring not only Father Frosts, but also the Snow Maiden, his helper. Rainy weather did not stop over two hundred Frosts and Maidens from gathering on Lenin Square in sea of red and blue for a disco. A Chihuahua with a Father Frost costume and his Snow Maiden master won the prize for the most original pairing.