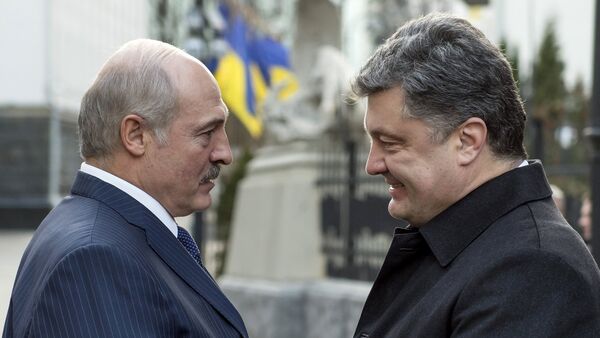 Ukraine is interested in supporting Belarus in developing relations under the Eastern Partnership initiative, according to the statement of Ukrainian President Petro Poroshenko's press service.

"We are interested in supporting Belarus, if deemed possible [by Belarus], in developing relations under the Eastern Partnership initiative," Poroshenko was quoted as saying by the press service.

The Ukrainian president pointed out that he was talking about using technology, law and finance to the mutual benefit of the countries.

Eurasian Economic Union to Continue Work With US Despite Tensions: Official
Poroshenko added that Ukraine was genuinely interested in effectively developing trade, economic and political relations with Belarus, as well as cooperating in the defense sector.

Belarus' President Alexander Lukashenko said that Belarus was Ukraine's reliable and honest partner in both political and economic issues.

On Saturday, Russian Foreign Ministry spokesperson Alexander Lukashevich said that Russia hoped the EU would consider the flaws of the Eastern Partnership initiative and was prepared to create a common economic and humanitarian space "from the Atlantic to the Pacific".