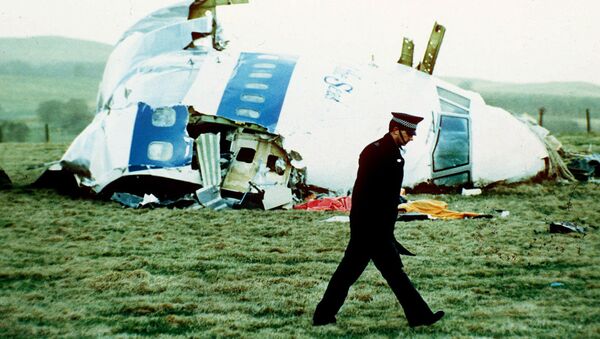 Scottish prosecutors involved in the investigation of Lockerbie bombing in 1988 are “afflicted by wilful blindness” by ignoring concerns from distinguished UK lawyers, Robert Black QC, a Professor of Scots law has told Sputnik.

EDINBURGH, December 21 (Sputnik), Mark Hirst – Scottish state prosecutors involved in the investigation of the Pan Am 103 bombing over Lockerbie in 1988 are “afflicted by wilful blindness” by ignoring concerns from distinguished UK lawyers about the safety of the conviction of Libyan Abdelbaset al-Megrahi, Robert Black QC, a Professor of Scots law has told Sputnik.

“[Prosecutors] must be afflicted by wilful blindness or by unquestioning loyalty to the Crown Office party line,” Black told Sputnik Sunday.
“Among the distinguished lawyers who have expressed grave concerns about the evidence are Sir Gerald Gordon QC — who was in charge of the Scottish Criminal Cases Review Commission (SCCRC) investigation in 2003 to 2007, Michael Mansfield QC, Anthony Lester QC, Gareth Peirce, Benedict Birnberg and Jock Thomson QC,” Black added.

Reports Claim Terrorist Ahmed Jibril Linked to Lockerbie Bombing Assassinated in Syria
At a service in Washington to mark the 26th anniversary since the bombing that claimed 270 lives, the worst single terrorist attack in British history, Lord Advocate Frank Mulholland, who heads Scotland’s prosecution, known as the Crown Office, told American relatives, “During the 26-year long inquiry not one Crown Office investigator or prosecutor has raised a concern about the evidence in this case.

“We remain committed to this investigation and our focus remains on the evidence, and not on speculation and supposition,” Mulholland added.
Black, along with many UK relatives of victims, has long claimed the prosecution of Megrahi was a miscarriage of justice. The Professor is currently campaigning to have a public inquiry established that would review all the evidence, including new information that, campaigners believe, throws fresh doubt over prosecution claims that Libya was responsible for the attack. But Black told Sputnik the first step would be to overturn Megrahi’s guilty verdict.

“I think we may get there eventually,” Black told Sputnik referring to the prospects of securing an independent public inquiry. “But realistically the conviction will have to be overturned first – hopefully as a result of the current SCCRC application culminating in a reference back to the High Court.”
Megrahi, who was suffering from terminal cancer, was released on compassionate grounds by the Scottish Government in 2009 and returned to Libya where he died in 2012. In June this year the Libyan’s relatives instructed a Scottish lawyer, Aamer Anwar, to start the process that they hope will lead to an appeal being heard in the Scottish High Court.

But Black told Sputnik that although a posthumous appeal was allowed under Scots law the process was not straightforward.
“The main obstacles are firstly the High Court's power to refuse to hear an appeal even when allowed by the SCCRC,” Black told Sputnik.

“The second obstacle is the tactic of delay. This was the Crown's principal tactic in the last Megrahi appeal, exercised so successfully that a case that should have been concluded before Megrahi’s illness was diagnosed had only just started when he had to apply for compassionate release. I have no doubt that [prosecutors] will use it again. Dragging things out adds to the expenses of the appellants – who will not this time be subsidised by the Libyan government – and the Crown will hope that they run out of money,” Black said.

In 2007 the SCCRC, following a four-year investigation into the case, concluded there were six grounds to refer the case back to the court of appeal, concluding that there may have been a miscarriage of justice. Shortly after the UK Government secured a Public Interest Immunity order preventing key evidence from being given to the defence that might assist in Megrahi’s defence.

“They will again assert Public Interest Immunity in respect of the document relating to timers that formed the basis of two of the SCCRC's grounds of referral in 2007,” Black told Sputnik. “This, of course, will contribute to delay and expense.”