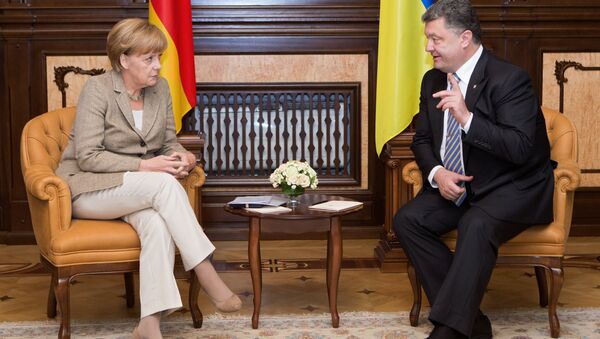 © Sputnik / Mikhail Markiv
/
Go to the photo bank
Subscribe
German Chancellor Angela Merkel and Ukrainian President Petro Poroshenko have discussed the peace process in Ukraine and agreed that the recent video conference of the trilateral Contact Group is a positive shift on the path towards fulfilling the Minsk agreements.

"Petro Poroshenko and Angela Merkel discussed the peace process in Donbas [Ukraine's southeastern regions]. The two sides agreed that the video conference of the trilateral Contact Group that took place a few days ago is a positive shift on the path towards fulfilling the Minsk agreements," the statement, released Saturday after Poroshenko and Merkel held a telephone conversation, said.

According to the statement, Poroshenko and Merkel also agreed that another Contact Group meeting is a key to ensure the pullout of troops from the conflict regions in Ukraine and to secure the release of prisoners.

DPR Insists December 12 Earliest Time for Contact Group Meeting
On Friday, during a video conference, the Kiev government and the self-proclaimed people's republics of Donetsk and Luhansk (DPR and LPR) failed to set the date of the next round of Ukraine reconciliation talks.

DPR chief negotiator Denis Pushilin told reporters after the conference that more video linkups may be needed to clarify all the remaining issues, so that the next Contact Group meeting could be held in the Belarusian capital, Minsk, before the New Year.

The September 5 meeting of the Contact Group, which comprises representatives of Kiev, DPR and LPR independence supporters, Russia and the Organization for Security and Co-operation in Europe (OSCE), led to the signing of a ceasefire agreement between Ukraine's conflicting sides.

The conflict in Ukraine escalated in mid-April when Kiev launched a military operation against independence supporters in the Donetsk and Luhansk regions.

Both sides have repeatedly accused each other of violating the ceasefire which came into force in September.