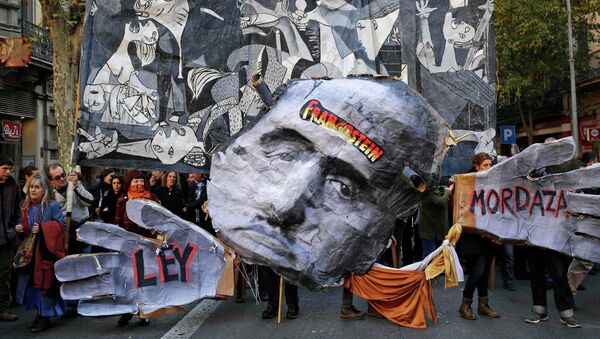 Numerous protests against the new Spanish public security law broke out all over Spain on Saturday.

Amnesty Int’l Influences Senators to Prevent Spain’s 'Gag Law' Adoption
MOSCOW, December 21 (Sputnik) — Numerous protests against the so-called "gag law" took place in Spain on Saturday, in response to legislation, recently approved by the country's parliament, which according to the opposition, violates human rights to freedom of assembly and speech, and also infringes the rights of immigrants.

The country's Congress on December 11 adopted a Law on Public Safety, which significantly strengthened the penalties for violations during protests. The law has raised outrage across the country and was dubbed the "gag law" by the media. The penalties are for crimes during protests, such as the distribution of photographs of police officers that could to endanger them or their operations or participating in demonstrations outside parliament buildings or key installations and can result in fines from 30 000 to 600 000 euros.

Spain's Anti-Protest Bill is Return to Franco Dictatorship: Opposition
In addition, the law permits the immediate removal of Spanish immigrants, who illegally crossed the border, without giving them the opportunity to apply for asylum. The new law will allow police in Spain's North African enclaves of Ceuta and Melilla to summarily expel migrants caught trying to enter Europe by storming border fences.

More than 30 Spanish cities on Saturday hosted organized rallies, marches and other actions under the slogan "Gag Law: Why do they want to put us to silence?,

"The purpose of the reform package adopted — not to guarantee the security of citizens, as claimed by the government, but to prevent and to suppress the freedom of peaceful assembly in the face of a growing wave of criticism among citizens, who disaffected with the crisis management we have been suffering from 2008", "We not a crime ", — says the slogan of organizers.

The biggest protest took place in the center of Madrid. Thousands of people participated in the protest. "Freedom of speech and assembly," "voice of the people is not illegal!" — They chanted. "Do not be silent!" — was written on posters.

Initially it was planned that the rally will be held in the Isabel II Squre, but the participants decided to go out to the capital's main square, Puerta del Sol. Law enforcement officials repeatedly blocked the way of the column on the main streets of the capital. The column stopped in front of a police cordon. People raised their hands and shouted, "This is our weapon." "Gag Law — is a threat," — they chanted. Then they turned and continued their way on other streets. "We had enough of the police state" — the protesters chanted. As a result, the column managed to reach the destination — Puerta del Sol.

In Barcelona, its members consider the law an "attack on civil and political rights" and "return to the days of Franco." The protest was attended by more than one thousand people. The rally took place under the slogan "Gag will not force us to be silent! Defend our rights!", "Freedom! No to repressions and no to the gag law! "- shouted the protesters. The demonstrators gathered in the University square and moved toward the building of the Spanish government office.