Ukraine to Spend Over $5 Billion on Defense in 2015: Security Council 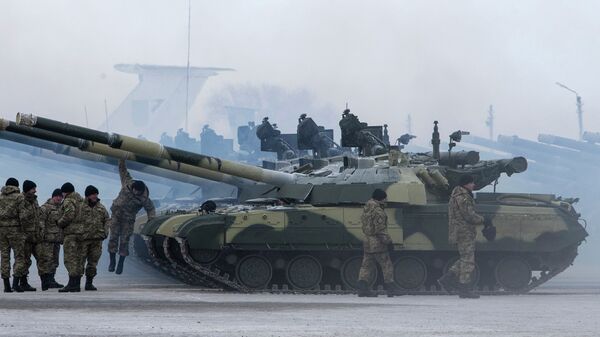 Secretary of the Ukrainian National Security and Defense Council Oleksandr Turchynov announced Saturday that 86 billion Ukrainian hryvnias, or about $5.4 billion, in defense and national security funding will be allocated to Ukraine’s 2015 budget.

“Out of 86 billion, 80 will be outlined in the budget’s general figures and for 6 billion the government will issue state guarantees for the purchase of weapons, military equipment needed by the armed forces… within the framework of the state defense order,” he said, following a Council meeting, adding that 86 billion hryvnias is a “colossal sum”.

Ukraine to Increase Troop Numbers by 18,000 in 2015: Defense Minister
Ukraine’s military expenditure for the next year will amount to five percent of the gross domestic product, Turchynov explained.

An armed conflict started in Ukraine’s eastern regions this spring, when Kiev launched a military offensive against Donetsk and Luhansk independence supporters, who established so-called people’s republics, following the February overthrow of then-president Viktor Yanukovych. Since the signing of a ceasefire agreement in September, the warring sides have accused each other of numerous truce violations.

In 2013, Ukraine’s military budget amounted to 2.9 percent of its GDP, according to World Bank data.