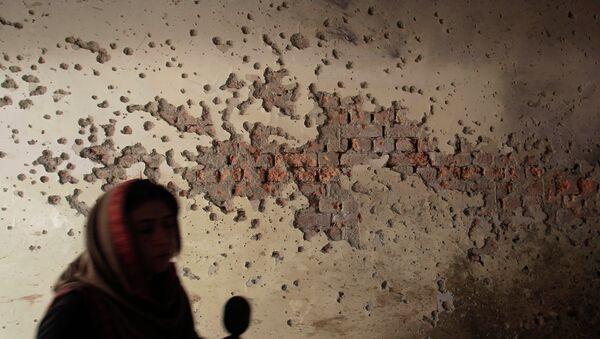 Afghan refugees will be expelled in a month's time from the Khyber Pakhtunkhwa province, which borders Afghanistan to the north-west, the provincial minister for information said.

US Drone Strike Kills at Least 5 Suspected Militants in Pakistan: Official
MOSCOW, December 20 (Sputnik) — The Pakistani government has decided to expel all Afghan refugees from the Khyber Pakhtunkhwa border province, following a recent Pakistani Taliban attack on a military school in it's capital Peshawar, the provincial minister for information said.

"Time has come for the federal government to take practical steps for the repatriation of the [Afghan] refugees," Mushtaq Ghani was quoted as saying by Afghan Khaama Press new agency after the decision was taken on Friday.

Ghani said that the Afghan refugees would be expelled in a month's time from the Khyber Pakhtunkhwa province, which borders Afghanistan to the northwest.

HRW Urges Pakistan to Stop Executions in Response to Peshawar Tragedy
The decision was taken after an Pakistani intelligence report claimed that the Pakistani Taliban, also known as Tehreek-e-Taliban Pakistan (TTP), carried out the Army Public School massacre on Tuesday under the control of militants in Afghanistan, as reported by the news agency.

TTP militants said the attack had been made in retaliation for the recent advancement of Pakistan's armed forces against the extremist group in the northwest of Pakistan.

Meanwhile, the Afghan Taliban, alleged to support the Pakistani Taliban, condemned the school attack in an official statement, saying that the killing of innocent people, children and women was against Islamic law.

Pakistan Taliban Identifies Mastermind of Peshawar Massacre as Umar Mansoor
In separate news, the Pakistani government executed two prisoners convicted for terrorism in light of the school attack. Renewed Pakistani army airstrikes in the northwestern Afghan border regions, seen as a response to the school attack, have also killed 27 suspected militants on Saturday, according to Anadolu news agency.

The Pakistani Taliban became active in 2007. The militant group is responsible for several deadly attacks in north-west Pakistan. The TTP aim to fight the Pakistani state and establish Sharia (Islamic) Law.