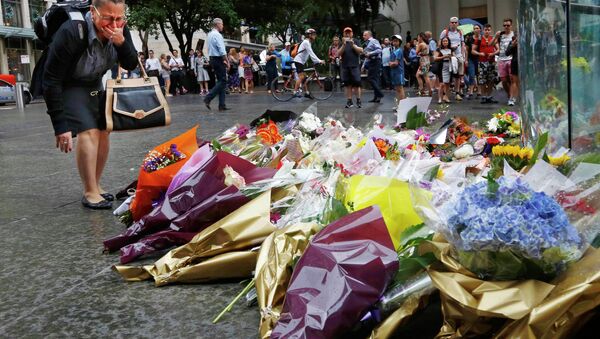 The protest was organized by a leader of the Australian “Party for Freedom”, well-known for its anti-Muslim position.

MOSCOW, December 19 (Sputnik) - A small group of Australian residents organized an anti-Islam protest near the notorious Sydney café, where several people were taken hostage by an Islamic extremist on Monday, according to the Sydney Morning Herald.

"Muslim terrorists not wanted here - neither are their leftist supporters", was a slogan on one of their banners. “Tony Abbott - will you protect us from multiculturalism?" said another.

These pricks in Martin Place today. No respect pic.twitter.com/vAVHWGf6X6

The Sydney café siege took place on December, 15, when a gunman stormed a Lindt Chocolat Café and took 18 people hostage. The attacker, Man Haron Monis, was born in Iran, but has been granted an Australian citizenship as an asylum seeker.  Monis is reported to have been recently inspired by radical ideology and became follower of the Islamic State.

The hostage crisis claimed lives of three people, including the attacker. Four other café visitors and one police officer were injured, according to BBC.