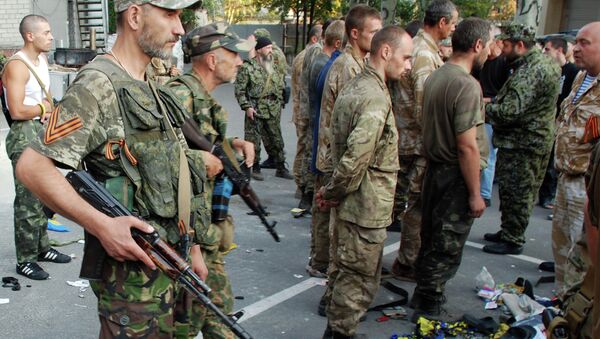 Self-proclaimed people's republics of Donetsk and Luhansk in eastern Ukraine and the Ukrainian government agreed to carry out an exchange of prisoners in all-for-all format.

MOSCOW, December 19 (Sputnik) — Representatives of the people's republics of Donetsk and Luhansk (LPR and DPR) in eastern Ukraine and Kiev authorities agreed Friday to carry out a prisoner exchange in an 'all-for-all' format, an LPR negotiator said.

"The main task is to do it in all-for-all format. We are working on concrete details, how to implement this stage by stage," Vladislav Deinego said.

Kiev Plans to Complete Prisoner Exchange With East by End of Year: Official
"Even if the Minsk talks are delayed this will be a priority issue. We will coordinate the prisoner swap even without waiting for Minsk talks," Deinego said.

The previous talks in Minsk, the capital of Belarus, between the Kiev authorities and independence supporters took place in September through the mediation of Russia and OSCE.

The talks resulted in a number of agreements, including an all-for-all prisoner exchange between the warring sides.

Since then, several prisoner swaps between Kiev and the Donetsk and Luhansk people's republics have already taken place.