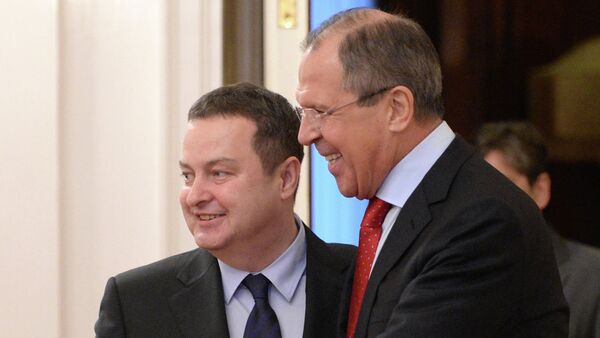 “In regard to accusations during the G-20 meeting that Russia is making Serbia more politically and economically dependent on Russia, then we’re not doing that. This is some sort of neo-colonial slang,” Lavrov said during a joint press conference with Serbian Foreign Minister Ivica Dacic in Moscow.

Merkel: Russia Obstructing Moldova, Georgia, Ukraine Association With EU
Following the November summit of G20 leaders in Brisbane, Australia, German chancellor Angela Merkel accused Russia of attempting to spread its influence to the former Soviet states of Moldova and Georgia and claimed that “if this continues… we will have to raise the question of Serbia.”

The European Union, the United States and a number of their western allies have introduced several rounds of sanctions against Russia over its alleged involvement in the Ukrainian crisis. Serbia has refused to support the restrictive measures.

Serbian officials have repeatedly underlined that Serbia would not choose sides between Russia and Europe and would not end its friendly relations with Moscow in order to speed up membership in the EU.