Obama to Sign Ukraine Freedom Act, Does Not Intend to Impose New Sanctions 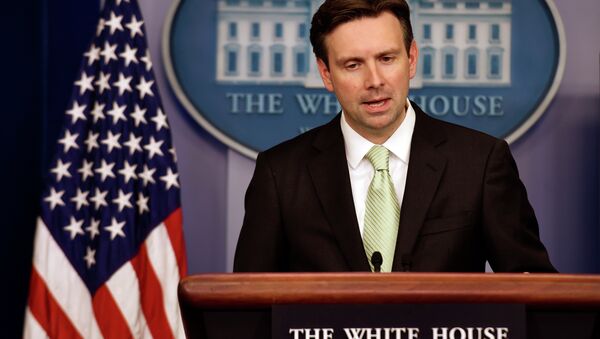 According to the White House spokesperson, US President Obama does not intend to impose sanctions under the Ukraine Freedom Act, however, the law gives additional authorities that could be utilized if "circumstances warranted."

Tongue Slip: Ukraine Freedom Support Act Still Not Signed by Obama, US Says
WASHINGTON, December 18 (Sputnik) — US President Barack Obama intends to sign the Ukraine Freedom Act but does not want to impose sanctions under the law, White House spokesperson Josh Earnest said during a press briefing on Thursday.

“The President does intend to sign H.R. 5859 [Ukrainian Freedom Act] into law, signing the legislation does not however signal a change in the administration’s sanctions policy…” Earnest said.

"We continue to explore a range of options to increase pressure on Russia to change course on Ukraine, including measures aimed specifically at Crimea," Psaki stated, adding that she did not have any time line or predictions on the matter.

The spokesperson said that the United States welcomes the European Union's announcement of further sanctions on investment services and trade with Crimea and Sevastopol.

Psaki confirmed that Washington and the EU coordinated on the latest set of sanctions.

"We've coordinated closely, we've worked in lockstep and that is continuing," she said. "The purpose of targeted sanctions is to make clear that that they are cost attached to Russia's ongoing violations of sovereignty and territorial integrity of Ukraine. Crimea is part of Ukraine."

According to the Council of the European Union's official communique released on Thursday, the EU has imposed new sanctions against Crimea that will ban investments and tour operator services beginning on December 20.

EU operators will thus be banned from offering tourist services on the territory of the peninsula. In addition, EU cruise ships are no more allowed to call at Crimean ports unless there is an emergency situation.

The new sanctions also prohibit the export of certain goods and technologies to Crimea. They were passed in written form and will be published on Friday and go into force on Saturday.

'Ukraine Freedom Support Act' Advocates War, Not Freedom
The Ukraine Freedom Support Act presupposes US assistance to Ukrainian government in “restoring its sovereignty and territorial integrity”. It authorizes, but does not mandate US president to provide lethal and non-lethal aid to the Ukrainian government and to impose a new round of economic sanctions on Russia’s defense, energy and finance sectors.

In July, the United States, as well as their allies, have imposed several rounds of sanctions against Russia over its alleged interference in Ukraine’s internal affairs – a claim that the Kremlin has repeatedly denied. Economic sanctions implemented in July were preceded by several rounds of restrictions imposed by the West against Russian and Crimean officials and individuals that Brussels believed to have played a role in "destabilizing" Ukraine.

Moscow has repeatedly said that it is not a party to the Ukrainian internal conflict, adding that the sanctions imposed against Russia are “illegal”.