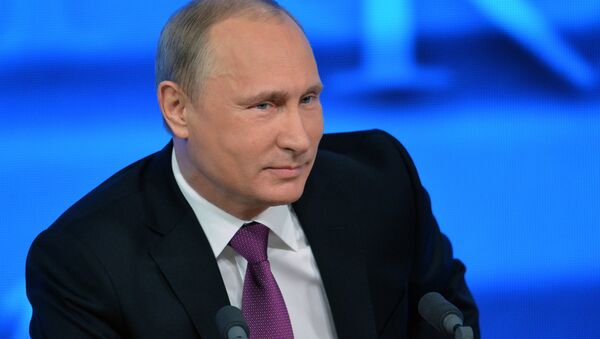 “We are very close to the settlement of this problem [Iranian nuclear issue]. The Iranian leadership is demonstrating great flexibility, I believe. And I do not understand why the final deal has not been inked yet. I hope it will happen in the near future,” Putin said at a press conference.

Putin added that a visit to the Iranian capital Tehran is currently being discussed through diplomatic channels.

“My trip to Tehran is possible, we are currently arranging it through diplomatic channels… I have been to Tehran. We have had regular meetings but the trip is important not for the sake of the trip,” Putin said at a press conference.

“If we find that we need a separate meeting [with the Iranian president], then we have no limits. We have no limits regarding any sort of external pressure,” Putin added.

Russia
Putin Not Ruling Out Visit to Tehran
The P5+1 group of six world powers comprising Russia, the United States, the United Kingdom, France, China and Germany joined diplomatic efforts back in 2006 in an attempt to reach a deal with Tehran authorities assuring the peaceful nature of the Iranian nuclear program. The parties failed to reach a conclusion by the deadline of November 24 and agreed to continue the discussions until July 2015.

The West accuses Iran of developing nuclear weapons under the guise of a civilian atomic energy program. Tehran says it wants enrichment capabilities to develop reactor fuel, and for other peaceful purposes.

The UN Security Council, the European Union, the United States and a number of other countries have imposed several rounds of sanctions on Iran over its nuclear program.