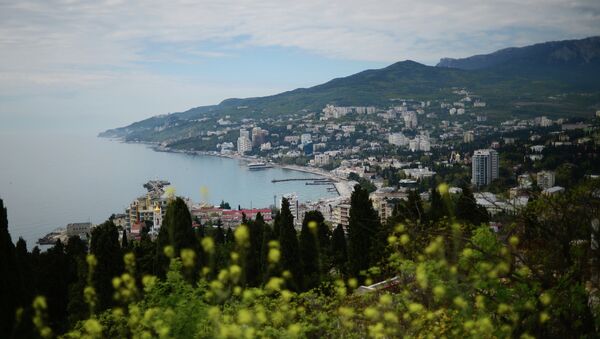 © Sputnik / Konstantin Chalabov
/
Go to the photo bank
Subscribe
The sanctions were passed in written form and will be published on Friday and go into force on Saturday.

EU Foreign Policy Chief Expects New Sanctions Against Crimea on Dec.18
BRUSSELS, December 18 (Sputnik) – The European Union has imposed new sanctions against Crimea, that will ban investors and tour operation services beginning on December 20, according to the Council of the European Union's official communique released Thursday.

"From 20 December, investment in Crimea or Sevastopol is outlawed. Europeans and EU-based companies may no more buy real estate or entities in Crimea, finance Crimean companies or supply related services," the statement said.

EU operators were banned from offering tourist services on the territory of the peninsula. In addition, EU cruise ships are no more allowed to call to Crimean ports, unless there is an emergency situation.

Putin:Russia Punished By Sanctions for Desire to Preserve National Identity
The new sanctions also prohibit the export of certain goods and technologies to Crimea. "These concern the transport, telecommunications and energy sectors or the prospection, exploration and production of oil, gas and mineral resources."

The sanctions were passed in written form and will be published on Friday and go into force on Saturday.

Crimea broke away from Ukraine and reunified with Russia following a referendum in March. Kiev and Western countries have labeled the referendum as illegitimate and imposed sanctions against a number of Crimean and Russian officials, allegedly involved in the peninsula's reunification with Russia.