Putin: Poroshenko Seeks Peace in Ukraine, but Many Others Want War 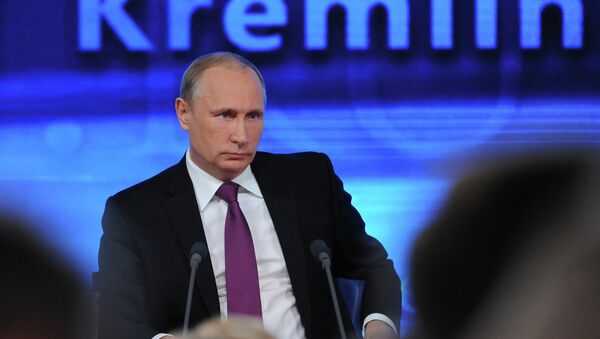 President Putin believes his Ukrainian counterpart seeks to reach peace but there is a plenty of warmongers who can impede the process.

“Naturally, the president of Ukraine wants to settle [the crisis], I have no doubts of his determination to do that. But he is not the only one [political force] there. We can now hear statements by other officials urging to ‘fight to the bitter end…’ There’s too many belligerent statements,” he told reporters.

On Wednesday, secretary of Ukraine's National Security and Defense Council Oleksandr Turchynov said that Ukraine needs to build one of the most powerful armies in Europe. "Our war will end only when all the [Ukrainian] territory is liberated, including Crimea," the official said.

Ukraine Must Create One of Europe’s Most Powerful Armies: Security Council
In addition, Turchinov along with Ukraine's Prime Minister Arseniy Yatsenyuk has stressed that Ukraine is ready to declare martial law should the armed conflict intensify.

Crimea broke away from Kiev and reunified with Russia following a referendum in March. Ukraine and the West have declared the vote illegal.

Kiev's military operation against eastern Ukraine's independence supporters has killed over 4,700 people since April, according to the United Nations. The sides have reached a ceasefire agreement on September 5, but have since been accusing each other of violating the truce on a regular basis.