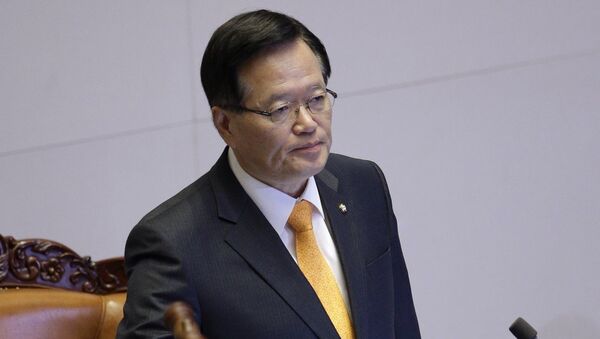 China's northeastern region would become the main beneficiary of a united Korea and Korea-China relations would become more solid in terms of economics, the South Korean Assembly speaker said.

"A peaceful unification of the Korean Peninsula would bring gains beyond imagination to China. China's northeastern region would become the main beneficiary of a united Korea and Korea-China relations would become more solid in terms of economics," Chung Ui-hwa said addressing the students of the China Foreign Affairs University in Beijing, as quoted by the agency.

The senior South Korean lawmaker, however, made clear that Pyongyang's nuclear activities are inappropriate, and urged China's authorities to contribute to denuclearizing the North.

Kim Jong Un’s Sister May Visit South Korea
"A nuclear North Korea won't be tolerated. Many South Korean people think that China is well fitted for persuading North Korea to give up nuclear weapons and emerge as a responsible member of international community," Chung added.

The 1950-1953 Korean war that divided the country into communist North and capitalist South Korea ended without signing a peace treaty. In March, South Korean President Park Geun-hye said that she is not giving up on the idea on reunification of the two Koreas and declared human rights, infrastructure development and integration the basis for future reunification.

One of the main issues between the two countries is the ongoing North Korean nuclear program. The last six-party nuclear talks comprising North and South Korea, Russia, the United States, China and Japan were held in December 2008. Since then, negotiations have stalled and North Korea has conducted two more tests.