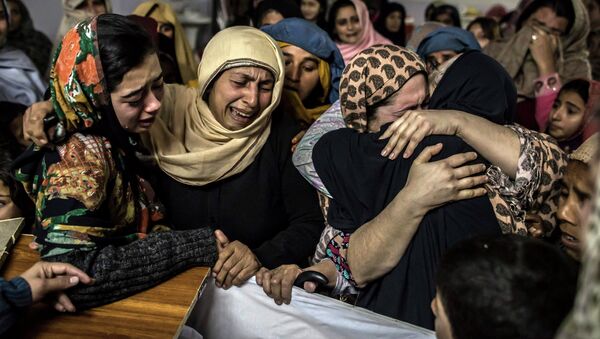 © REUTERS / Zohra Bensemra
Subscribe
International
India
Africa
Following the end of the death penalty ban, those accused of terrorism in Pakistan could face death sentences. Pakistani prime minister's decision follows the recent killing of more than 140 people, including 132 children, in a school in the city of Peshawar.

500 Students Taken Hostage in Taliban Attack on Pakistani School
MOSCOW, December 17 (Sputnik) — Pakistani Prime Minister Nawaz Sharif has agreed to lift the death penalty moratorium in an attempt to fight terrorism in the country following a Taliban attack on a school in the city of Peshawar, a spokesperson for the Pakistani Prime Minister’s Secretariat said Wednesday.

“It was decided that this moratorium should be lifted. The prime minister approved,” government spokesperson Mohiuddin Wani said as quoted by The Times of India.

Death Toll in Pakistan School Attack Rises to at Least 141
Following the end of the moratorium, those accused of terrorism in the country could face death sentences. Human rights group, Amnesty International, estimates that there are currently 8,000 prisoners on death row.

Sharif's decision to lift the ban on the death penalty follows the recent killing of more than 140 people, including 132 children, in a school in the city of Peshawar, Pakistan.

Two Blasts Heard Near Girls College in Pakistan
On Tuesday, Taliban militants attacked the Army Public School, allegedly in retaliation for recent actions by the Pakistan Army directed against the extremist group.

Immediately following the incident, the Pakistani prime minister announced three-days of mourning, starting Wednesday, to remember the victims of the attack. The international community has extended condolences to the families of the victims of the tragedy, with the UN High Commissioner for Human Rights urging people to unite in the face of "savage extremism."