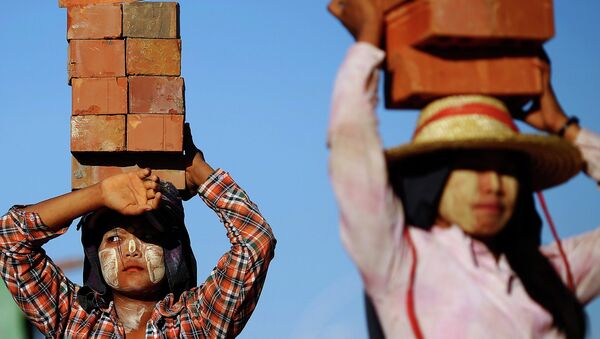 MOSCOW, December 16 (Sputnik) — Karen refugees who fled ethnic persecution in Myanmar have boosted the local economy in Sioux Falls, South Dakota where 9 percent of jobs in the county are performed by the 2,000 refugees, a BBC documentary released Tuesday reports.

More than 2,000 refugees from the Karen region of Myanmar moved to South Dakota to avoid ethnic persecution by their government, according to the short film by the BBC Pop Up project telling about life in Pittsburgh area.

"Nine percent of every job in the county is held by a Karen person. Originally we were the only business that had the Karen people. But currently there about 30 businesses in the area that employ Karen people," Mark Heuston, director of human resources at Dakota Provisions turkey processing plant, said in the documentary.

More than 60 percent positions at Dakota Provisions are currently occupied by the Karen people, according to the film.

"Because of Karen this is probably the most efficient turkey processing facility in the United States," Heuston added.

The turkey-processing facility provides the refuges with an immigration attorney to help them to go through the application process to become US citizens, Heuston said.

"Karen people have been through a lot. For us it is easy to adapt to weather or to the factory, because here we don't have to worry about being killed," a Karen refugee said in the documentary.

The Karen is one of Myanmar's largest ethnic minority populations comprising 7 percent of the population of 55 million.

The armed conflict between the Karen people and the Myanmar central government began in 1949, the year after Myanmar gained independence from the British Empire, and lasted for more than 50 years. Seeking autonomy and cultural rights, the Karen National Union (KNU) embarked upon a civil war and a series of ethnic rebellions against the central government.

The government of Myanmar has been repeatedly accused of "ethnic cleansing" and human rights abuses against the Karen and other ethnic minorities since 1949.

Although the sides signed a ceasefire agreement in 2004, the human rights abuses against the ethnic minority continued.

The resettlement program for Karen refugees was launched by the US and Thai governments in 2005. Since then more than 73,000 refugees have settled in the United Sates, according to the UN Refugee Agency. Over 120,000 Karen refugees live in special camps in Thailand.