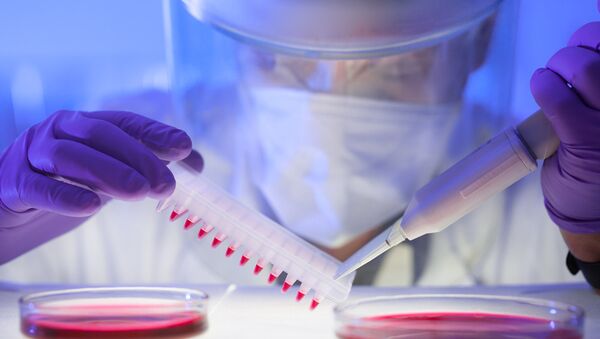 Scottish Scientists have discovered a protein in cells that prevents cancer from developing in what Taranjit Singh Rai, one of the scientists who led the research, could become a "breakthrough" in the fight against the disease.

Breakthrough Drug That Can Fight Advanced Bladder Cancer Discovered
EDINBURGH, December 16 (Sputnik), Mark Hirst – Academics at the University of the West of Scotland have discovered a protein in cells that prevents cancer from developing in what Taranjit Singh Rai, one of the scientists who led the research, told Sputnik News Agency could become a "breakthrough" in the fight against the disease.

"This discovery is the start of what could become a bigger breakthrough," Rai told Sputnik on Tuesday. "We have discovered this new mechanism which stops cells becoming cancer cells. We are dealing with the mechanism whereby a cell can stop cancer."

The six-year study undertaken by Rai and colleagues at Glasgow University and the Beatson Institute of Cancer Research has found a protein, known as HIRA, that prevents cancer developing and although the study only focused on skin cells the scientists believe it will play a significant role in other types of cancers.

"I expect this protein to be important in the majority of cancers, but it is still very early days," Rai told Sputnik.

The scientist said firstly it was important to understand the process of a cell becoming a cancer cell. Currently, when cancer is found, attempts are made to remove the affected cells by surgery or treatment such as chemotherapy.

"Talking about treatment in the context of this discovery is not the right way to go. What we have done has been to take a step back and understand the basics of what is happening first," Rai added.

Historically research into cancer has focused on the genetic changes that cell undergo that leads to them growing into a tumor, but Rai and his fellow scientists believe their research is important in demonstrating how people develop cancer in the first place.

"We expect things to be a little different in different cancers, but overall we think the mechanism might be the same. We need to better understand this protein, not just in skin cancer, but also other cancers," Rai added.

He reveled that the preliminary data indicated that the protein was present in other cancers as well, but could not go into further details on the subject.

The research was published in the journal Genes and Development and highlights the important role proteins play as a trigger which causes the DNA mutations which cause cells to become cancerous.