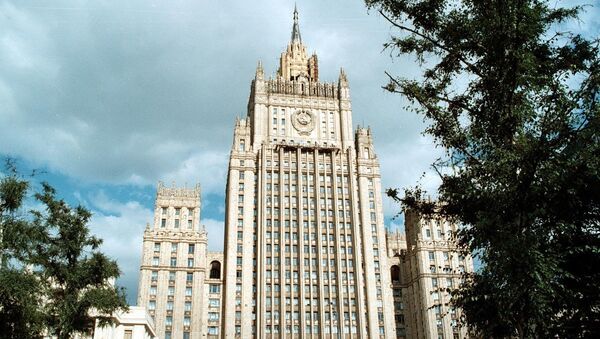 Russia's Foreign Ministry said Tuesday that Moscow and Copenhagen have closely cooperated while preparing their respective Arctic claims and will continue to cooperate on the issue.

UN to Consider Russian Arctic Shelf Claim in Summer 2015: Russian Minister
MOSCOW, December 16 (Sputnik) – Moscow and Copenhagen have prepared similar claims for extended continental shelf areas in the Arctic, and will continue to cooperate on the issue, the Russian Foreign Ministry said Tuesday.

“Our countries have closely cooperated while preparing their Arctic claims and will continue to cooperate on the issue,” the ministry said in a statement.

“Possible adjacent shelf areas of our countries in the high-latitude Arctic will be demarcated in a bilateral format, through negotiations, on the basis of the international law,” the statement reads.

On Monday, the Financial Times reported that Denmark and its autonomous dependent territory Greenland had submitted an official claim to the Arctic Shelf to the United Nations. Denmark lays its claim on an area of almost 900 square kilometers (347,5 square miles) of the Arctic seabed.

However, according to the Russian Foreign Ministry, the claim submitted to the UN Commission on the Limits and the Continental Shelf will not be considered until 10 years' time.

"This is not the question [to be solved] today or tomorrow. Taking into account the Commission's current workload, it will not begin to consider Denmark's submission earlier than 10-15 years," the statement said.

On Tuesday, Russian Natural Resources and Environment Minister Sergei Donskoi said that Russia will file its claim to the Arctic Shelf in the first quarter of 2015 and the United Nations will consider it in June or July.

Apart from Russia and Denmark, the United States, Canada and Norway also have territorial claims in the Arctic.