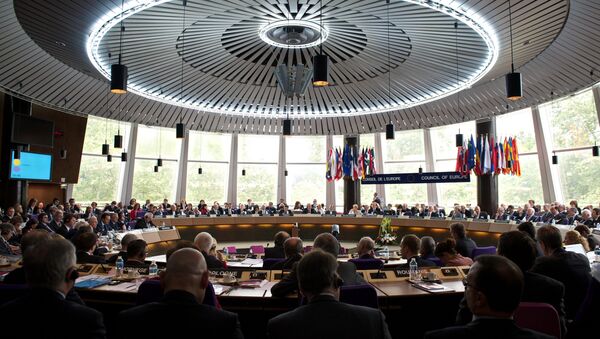 The European Court for Human Rights (ECHR)ruled against Russia in a lawsuit filed by former shareholders of the now-defunct oil giant Yukos, and awarded them a compensation of 1.9 billion euro and some $50 billion, respectively.

The panel of the court’s Grand Chamber earlier told RIA Novosti it was not commenting on its decisions.

The ECHR and the Permanent Court of Arbitration in the Hague have ruled against Russia in a lawsuit filed by former shareholders of the now-defunct oil giant Yukos, and awarded them a compensation of 1.9 billion euro and some $50 billion, respectively.

The Russian Finance Ministry responded promptly to the court's ruling by pledging to safeguard the country's national interests.

The ECHR's ruling comes less than a month after the Russian Justice Ministry appealed a similar ruling made in July by The Hague Permanent Court of Arbitration, which awarded compensation to Group Menatep Limited (GML), a holding that unites the former owners of the defunct oil company Yukos.

Yukos, a company controlled by Russian billionaire Mikhail Khodorkovsky, was declared bankrupt by a Moscow court of arbitration in 2006. Khodorkovsky spent a decade in prison for fraud and tax evasion until he was pardoned in December 2013.

Yukos managers claimed the Russian government had illegally forced the energy company out of business, which allowed Rosneft to snap up its assets and become the country's largest oil producer. Over the past few years, Yukos's managers and investors have won several cases against Russia and the companies that acquired the assets.