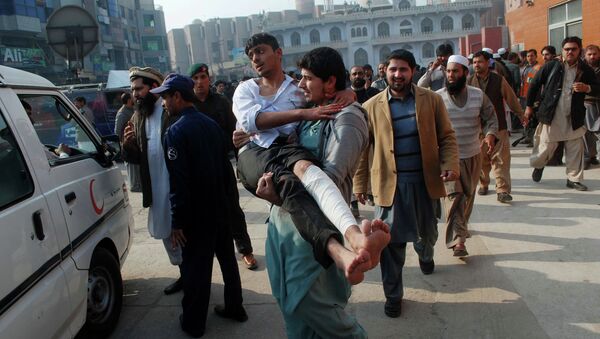 In the wake of a Taliban attack on a Pakistani school which left at least 126 people dead and up to 122 wounded, security expert Uday Bhaskar tells Sputnik that it is the Pakistani system of allowing militant groups to hide behind their religions in their attacks that culminates in such bloody assaults.

“What we are seeing in Pakistan is a stark reminder that such kinds of ideologies are [being] propagated and empowered. It's a kind of revenge on the actions taken by that Pakistani army against the Taliban,” he added.

Pakistani Prime Minister Nawaz Sharif has called the school massacre a national tragedy and is heading to Peshawar. And announced a three-day mourning over those killed.

Prime Minister leaves for Peshawar. All meetings in Islamabad cancelled for today. pic.twitter.com/fxZ93CTcra

"I feel that until and unless this country is cleansed from terrorism, this war and effort will not stop, no one should be doubtful of this. We have also spoken to Afghanistan about this and we will fight terrorism together," the Pakistani prime minister was quoted as saying by the the Dawn newspaper.

Terrorist attacks like the Taliban’s assault on the Pakistani school are a crime against humanity, India’s former Minister of State of External Affairs, Anand Sharma, told Sputnik.

"We condemn this type of terrorist activity. It is a heinous crime against humanity. All countries should unite to fight against terrorism," the former official said.

My heart goes out to everyone who lost their loved ones today. We share their pain & offer our deepest condolences.

It is a senseless act of unspeakable brutality that has claimed lives of the most innocent of human beings - young children in their school.

Indian Home Minister Rajnath Singh has also expressed condolences to the families who lost their children in the tragedy, said the attack is one of the bloodiest in Pakistan in recent years, exposed the real face of terrorism.

I strongly condemn the terrorist attack on a school at Peshwar(Pakistan). This dastardly & inhuman attack exposes the real face of terrorism

Malala Yousafza, a Pakistani activist for female education and the youngest-ever Nobel peace laureate said she was heartbroken by the senseless and cold blooded killing of scores of children

"I am heartbroken by this senseless and cold blooded act of terror in Peshawar that is unfolding before us. Innocent children in their school have no place in horror such as this," she said in a statement.

"I condemn these atrocious and cowardly acts and stand united with the government and armed forces of Pakistan whose efforts so far to address this horrific event are commendable," she added.