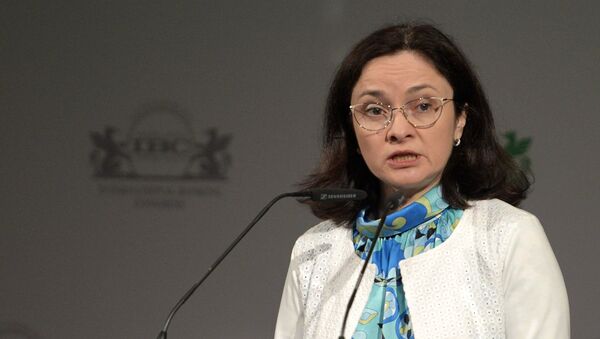 Central Bank head Elvira Nabiullina said that the decision to ditch regular intervention by introducing a floating currency exchange has lowered the attractiveness of speculators to operate on the currency market against the Central Bank.

"We have ditched regular intervention by introducing a floating currency exchange. I believe that this was a completely correct decision and this decision has lowered the attractiveness of speculators to operate on the currency market against the Central Bank," Nabiullina said on Rossiya-24 television.

"We have occasionally and spontaneously intervened, which has in some way influenced the currency market to a degree, but we believed it was important to make a more important decision by raising the percentage rate," she said.

Ruble Falls Further Against Dollar and Euro, Interest Rates Rise
"I would like to emphasize once again that the hike in our key rates are oriented first of all on lowering inflation and inflationary expectations. This will indirectly influence the currency market, but this may not be immediate," she added.

According to Nabiullina, the ruble is currently undervalued, and that over time it will return to a more normal valuation. She did not specify how much time is required, however.

Earlier on Tuesday, the Central Bank of the Russian Federation made its largest single interest rate increase since 1998, raising the rate from 10.5 to 17 percent effective immediately. The bank explained that the decision was aimed at limiting ruble depreciation and inflation.

On Monday, the Russian ruble suffered its sharpest decrease in 16 years. At the end of the day Monday, one dollar cost 64 rubles, while 1 euro was worth 79 rubles, the lowest level since 1998.

In recent months the Russian economy has suffered from the continuing decline of the price of oil and also from sanctions implemented against the country by the West over its alleged involvement in the Ukrainian crisis – a claim Moscow has repeatedly denied.