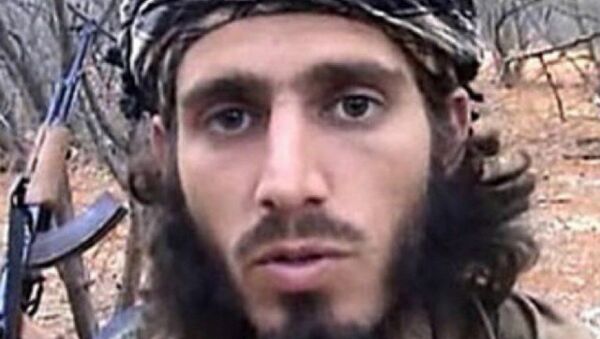 © Photo : Photo taken from Joseph Al-Qaeda Twitter
Subscribe
One minor Twitter celebrity has refused to support the wave of tolerance and non-discrimination toward Muslims in the aftermath of the Sydney hostage taking.

MOSCOW, December 16 (Sputnik) - As the tragedy with the hostages in Sydney progressed on Monday afternoon, a large number of Twitter users spread the hashtag #Illridewithyou, supporting Muslims and suggesting that one bad apple could not and would not ruin their general impression of Islam. One minor media personality, however, refused to support this wave of tolerance and laughed it off with black humor and provocation:

Here's an idea, lets focus on how Muslims are fearful of Islamophbia in Australia rather than the hostages & their families #illridewithyou

Twitter ‘troll’ Joseph Al-Qaeda @JihadistJoe, has picked up a following as a satirist that loudly pokes fun at the alleged connections between the religion of Islam and radical Islamist violence.

Joe’s profile message says: “I Love Islam & I Love Jihad as it helps me practice true Islam like Muhammed did.”

He is angry, ruthless and uncensored. He answered the liberal tolerance of Australians by saying “I won’t ride with you”, and uses the hashtag multiple times in his account.

Just to clarify, so there can be absolutely no misunderstanding whatsoever Islam is the Religion of Peace pic.twitter.com/3OLEBLhusD

Among his more graphic Tweets, featuring severed heads and mass graves, Joe writes comments like “when you accept that Islam is a mental illness and not a religion, things start to make more sense….” and “when Nazis did this [mass killings], global outrage; When Muslims do it, only ‘bigots’ are outraged? Imagine if the Jews did this”, referring to Islamic State militants’ brutal campaign of executions over the past months in Iraq and Syria.

I don't know who Joseph Al-Qaeda (@JihadistJoe) is, and I can't RT all his tweets, but he's very funny and DEADLY accurate. Follow him.

Joe has made clear his anti-liberal attitude on numerous occasions, stating "Hey Liberals if you like Islam now, wait until we install Sharia in your countries. You'll see its true beauty then", and illustrating the post with images of hangings, male/female inequality, and women in burkas.

Commenting on an article praising his Twitter account on BareNakedIslam, another anti-Islamic web resource, Joe noted that “the most disturbing part of running this twitter account is that I get more hassle from mealy mouth liberals [sic] do gooders than disgruntled Muslims. The enemy is within and is paving the way to accommodate the agenda of political Islam,” he noted.

Huffington Post writer John Sargeant severely criticized Joe following the Dawkins endorsement, noting that he “plays on Muslim stereotypes that all Muslims are a danger to society. Regrettably the cartoons @jihadistjoe uses hark back to the dark days of caricature designed to make bigotry and prejudice acceptable by being regularly seen.”

Jihadist Joe has something to say to his haters and liberals that fight against Islamophobia and intolerance:

There seems to be confusion on twitter about how many of us Muslims are "involved" in jihad, this pic clear it up pic.twitter.com/iQQo26DTMY

Joe has been accused multiple times of hate and bigotry, of expressing racism and supporting conspiracy theories, but he is a personality using cynical, very politically incorrect humor to try to balance out the growing presence of Islamic propaganda on YouTube, Twitter, Instagram, Tumblr (see: accounts such as "Bird of Jannah" and "Diary of A Muhajirah", or internet memes like #catsofjihad). Apart from advertising the jihadi way of life in social media, the Islamic State has also spread gory videos of beheadings and tortures. This loud and violent media campaign has popped the lid off Islamophobia in the media.

HBO’s generally liberal political satirist Bill Mahar has seen a backlash against him in recent months over comments like: “[Islam] is the only religion that acts like the mafia, that will kill you if you say the wrong thing, draw the wrong picture, or write the wrong book,” and for stating that moderate Muslims are not doing enough to combat against radical elements in their religion.  Jihadist Joe, while being on the same page, takes the idea even further. He believes there is no difference between a moderate Muslim and a radical Muslim, apart from a change of clothes.

What's the difference between an extremist muslim & a moderate muslim? A quick change of clothes ���� pic.twitter.com/uu3NMaJ3dE