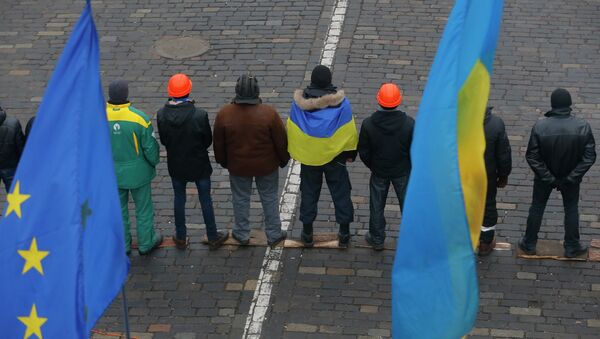 Merkel: EU Association Agreements With Ex-Soviet Countries Not Anti-Russia
WASHINGTON, December 16 (Sputnik) – The association agreement between the European Union and Ukraine was an alternative to the membership in the bloc, not a bridge to it, former Director-General for Enlargement at the European Commission Michael Leigh tells Sputnik

“In reality, the association agreement for most EU states was an alternative to membership, it was not a stepping stone to membership,” Leigh said Monday.

Leigh explained that during the four years of the agreement negotiations between the European Union and Ukraine, Kiev pushed for a mention in the introduction to the document that its goal was to eventually lead to Ukraine's membership of the European Union.

No Excuse for Ukraine to Delay Reforms: European Commissioner
“This was refused by the EU side, which only recently absorbed 12 new members, and had no appetite at all for further enlargement,” Leigh said.

“I think there was a communication failure in not explaining it more clearly to public opinion in the EU, in Ukraine, and indeed in Russia,” he added.

The point that Ukraine would not have to choose between the European Union and Russia was never made clear enough, Leigh emphasized.

“I think on the EU side there was an understanding that Ukraine would always have close relations with Russia that a significant part of the Ukrainian population had Russian as a mother tongue, and the EU never intended to challenge this. It was a communications failure,” he concluded.

The Ukraine-EU Association Agreement is a treaty that presupposes a political and economic association between the parties.

Medvedev: Kiev May Lose $15Bln After Association With EU
The political provisions of the agreement between Ukraine and the European Union were signed back in March, after Ukrainian President Viktor Yanukovych was ousted and the interim government came to power.

Ukrainian President Petro Poroshenko signed the economic part of the agreement in June. In September, the parliaments of Ukraine and the European Union ratified Ukraine's Association Agreement with the 28-member bloc.

Moscow has repeatedly stated that the implementation of the agreement carries economic risks for Russian-Ukrainian relations, and could trigger an uncontrolled flow of duty-free goods from Europe, forcing Russia to protect its market.

In September, Russia, Ukraine and the European Union reached a compromise on Kiev's free trade pact with the 28-member bloc, postponing its entry into force until the end of 2015.