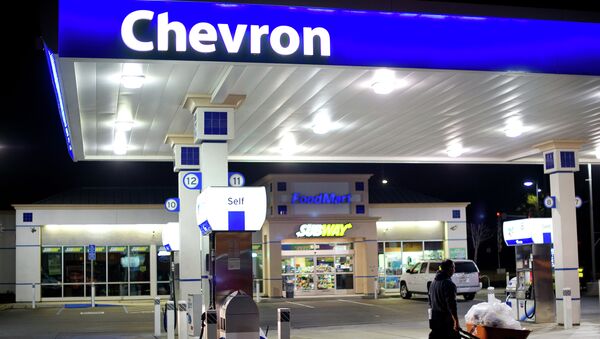 © AP Photo / Noah Berger
Subscribe
Experts claim that US energy giant decided to withdraw from the shale gas project in Western Ukraine Monday due to low world prices on gas, constant delays in the implementation of the project and high taxes.

The product sharing agreement (PSA) between Chevron and Ukraine's 'Nadra Oleska', 90 percent-owned by national joint stock company 'Nadra Ukrayny', was signed in November 2013 and was seen as a move that would reduce Ukraine's dependence on gas deliveries from Russia. Chevron, however, has decided to quit the project and there are several reasons for such a move.

"There are quite a number of things that are happening in the global oil and gas market that pushed Chevron towards such a decision. Oil prices have fallen quite sharply and this has an indirect effect on the price of gas both on the European market and other markets," senior research fellow at the Oxford Institute for Energy Studies Simon Pirani told Sputnik Monday.

Pirani added that there a similar situation was happening elsewhere in Eastern Europe. "For example, the shale gas project in Poland has not been successful. Some of the larger companies that went into Poland had great hopes but their hopes have not been realized… The Oleska field project is also difficult if prices are low," Pirani added.

Head of the Center for Energy Security at the Institute for the US and Canadian Studies Andrei Korneyev concurred, saying that the project became unprofitable because of the "current decline in world prices for gas."

"By an initiative of the Ukrainian Finance Ministry in August 2014 the fee for the use of [Ukraine's] subsoil for oil and gas exploration was increased twice and extended for all projects, including PSA's," Korneyev told Sputnik News Agency Monday.

The Center for Energy Security head described the existing taxation system in Ukraine as "excessive" and noted that there is little chance that other foreign investors would seek to participate in similar projects due to the existing geological, environmental, military and political risks.

"Chevron may simply be deciding that this particular project is more expensive, risky and difficult… Of course the business environment in Ukraine is difficult too. That is another part of their [Chevron's] thinking," Pirani said of the issue.

As for the military risks, Pirani reminded that "the major project which was signed in 2013 was the exploration at Yuzivsky [gas field] in eastern Ukraine operated by Shell," adding that the project "has been suspended because of the military conflict" in Ukraine, where a military operation was launched by Kiev in April against independence supporters of the country's southeastern regions.

"The production sharing agreement on the Oleska field was to due be signed at the end of 2012, however, this project was long delayed due to the position of Lviv and Ivano-Frankivsk local authorities," Korneyev told Sputnik, adding that the project's delay became a growing concern for foreign shareholders.

The Russian expert added that the situation with Chevron's withdrawal from the project "clearly shows the inconsistency of Ukraine's energy policy is prohibiting projects from getting off the ground, even those using internal resources that were ready for joint development."

Because of Chevron's decision, according to Korneyev, Ukraine is now deprived of both the prospect of an injection of urgently needed supplies of natural gas for the country's own oil fields and the expected profit to the budget from tax revenues. The economy of Ukraine, which, according to the International Monetary Fund (IMF), is expected to sink by 7.5 percent this year and by 4.3 percent in 2015, will also lose the $350 million that Chevron was planning to spend on seismic exploration and the drilling of gas wells.