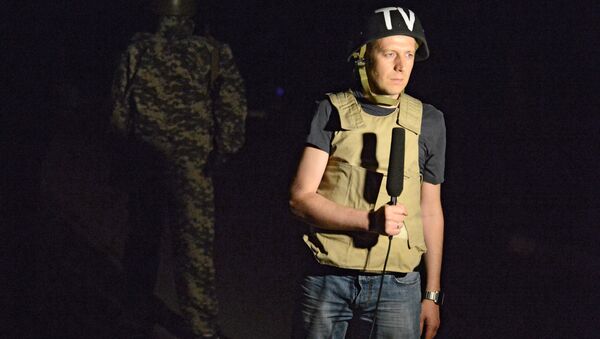 According to the report the year 2014 has been "terrible" for journalists around the world, with 128 killed.

Remembrance Day of Journalists Killed in the Line of Duty
GENEVA, December 15 (Sputnik) – The year 2014 has been "terrible" for journalists around the world, with 128 killed in 32 countries, the Press Emblem Campaign (PEC) said in a report Monday.

According to the report, the number is approximately the same as in 2013, when the amount of journalists who were killed stood at 129. PEC Secretary-General Blaise Lempen stressed that 2014 was a "terrible" year for media workers.

Top five most dangerous locations in terms of reporters' deaths were identified by the PEC as the Gaza strip with 16 killings, Syria with 13 deaths, Pakistan with 12 losing their lives, Iraq with a death toll of 10, and Ukraine with nine journalists killed.

The Press Emblem Campaign is a nongovernmental organization founded in 2004 in Geneva by journalists that has a "Special consultative UN status", according to the PEC website. The organization strives to bolster the legal protection of journalists on dangerous assignments around the world.