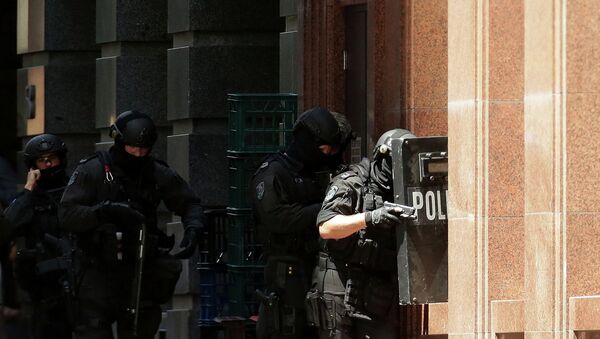 The Task Force Pioneer activation means establishing a coordinated police operations center, and is only used when dealing with terrorist attacks.

The Task Force Pioneer, which was activated at about 4 p.m. local time (05:00 GMT), is headed by NSWPF counter-terrorism boss Mark Murdoch.

Australian Police Contact Former Terror Suspect to Ask for IS Flag: Reports
At around 10 a.m. (23:00 GMT, Sunday), an unidentified gunman took about 10 staff and 30 customers hostage at the Lindt cafe in Sydney. The suspect was reportedly carrying a backpack and a device that looked similar to a suicide belt. Five hostages have managed to escape so far.

A black flag with Arabic writing saying "There is no God but Allah" was seen being waved behind the hostages in the cafe.

Australian authorities issued the country's first high-level terrorist threat in September. According to The Sydney Morning Herald, the Australian government has been issuing warnings that a terrorist attack could happen following the Islamic State militant group's threats to carry out a number of demonstration killings in Australia.