Medvedev: 'Russia Has Experienced Tragic Events in Ukraine as Our Own Pain' 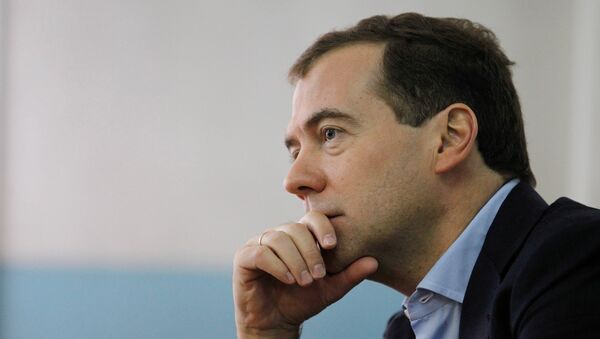 Prime Minister Dmitri Medvedev's op-ed for Nezavisimaya Gazeta included commentary on the historical and cultural closeness between the Ukrainian and Russian people, adding that this closeness has made the conflict in the country over the past year has made it particularly painful for Russians to observe.

MOSCOW, December 15 (Sputnik) — In an op-ed for Nezavisimaya Gazeta published on December 15, Russian Prime Minister Dmitri Medvedev explained that it has been very painful emotionally for Russia to reconcile the disturbing and destabilizing events and processes taking place in Ukraine, given the two countries’ shared culture, values, and historical identity.

"A year ago, at the end of autumn 2013, when the crisis in Ukraine began, no one could have imagined the consequences this 'bitter November' would have for our neighbors," Medvedev began. "A split occurred in society, running even through families." Combined with economic decline, "a surge of radicalism grew up to include the outright flaunting of Nazi symbology, and refugees flowed to neighboring states. Fighting is occurring on Ukrainians' own land against its own countrymen, and as a result, thousands of people have been killed, including civilians."

"Just one year has passed, and only memories remain of that country which was so close to us, with which we were close friends, conducted trade with, went on vacation to and to visit relatives in. In Russia, we are experiencing these events as our own pain. We are even assisting those who receive this assistance with a smirk, and continue to live by the slogan that 'Ukraine is not Russia'. I sincerely regret that representatives of the Ukrainian elite have failed to propose or to implement any other strategic program for the country's development. As Prime Minister, I see the consequences of this every day in the statistics, which confirm that the most difficult period for our neighbors, unfortunately, is still ahead."

Ukrainian People are Close to Russians in Spirit, Culture, and Mentality

Medvedev continued, noting that "whatever insinuations are made in our direction… we have no right to forget that on the other side of the border live people who are close to us in spirit, culture, and mentality; people about whose fate we will never be indifferent."

"A great deal unites us. After all, our relations are rooted over centuries. Unfortunately, objective realities are now being denied in Ukraine in order to pull our two peoples apart. This includes what we have in common in terms of culture, religion, and our thousand-year [common] history. The past is being crudely speculated upon, and ideological constructs are being imposed which have absolutely nothing to do with historical reality. This is understandable: the closeness which has developed between Russians and Ukrainians is unique, and has tremendous strength. It has been a crucial factor in relations between our two countries even after Ukraine gained its independence – in any case, a factor no less important than economics. And for the millions of people from Russia and from Ukraine whose fates and family ties have been intertwined, it is definitely more important than any other factor."

Ukrainian Culture is Close to the Heart of Every Russian

"Ukrainian culture is understandable and close to the heart of every Russian," Medvedev continued. "We think of Ukrainian folk songs as our own. The culturally rich Ukrainian nation has given the world [a great number] of talented artists, musicians, poets and writers; a creative heritage which is common to us all. For example, it’s worth noting the lives and work of Repin, Kuindzhi, Yaroshenko, Bulgakov, Babel. Having lived parts of their lives in Ukraine, they continued to maintain the warmest feelings towards her, and expressed them in their paintings, novels and short stories. It is also worth recalling just how enriched Russian literature has been made by Ukrainian motifs in the works of Pushkin, Tolstoy, Kuprin, Chekhov, Bloc, Pasternak, and Mandelstam. Who can say what figured more in the immortal works of Gogol, Ukrainian or Russian [culture]!"

"This culture belonged to both peoples, a culture that from the beginning was tolerant, open, always native to us, and a source of agreement between us. It raised us with the same values and ideals, the same principles on relations between peoples, norms of behavior in society and in family life. All of this is something that cannot be destroyed overnight.  Even when we began living in separate states, we continued to read the same books, to love the same artists, and to watch the same movies. We spoke the same language, which nearly a third of Ukrainians consider their native language, and which everyone in Ukraine understands. And it seemed to us that in the spiritual and cultural dialog between us, there would never be any limits."

"Many in Ukraine now have a sense of revolutionary euphoria," the Prime Minister continued. "It seems that it is enough to throw our common past, stretching centuries, into the dustbin of history, and start everything anew with a clean slate. Life will become comfortable and prosperous."

"The only problem is that this slate will be dirty; it already has blood on it. Ukrainian society has already begun paying for the illusions that it has generously been fed by the ruling elite, who dream about the appearance of European passports in their pockets. We hear about the victims of these illusions every day. Ukrainian soldiers and civilians continue to be killed by 'truce bullets'. There will be more victims; this is inevitable in a country where people do not have enough money for medicine, food, to raise their children, or for education –in short, for a normal life. We all feel deep sympathy for these people."

"However, the Ukrainian government has made its decision, and even if our neighbors have a poor understanding of the final price to be paid for this choice, it is their right to make this mistake," Medvedev added.

Russia Hurt by Ukrainian Authorities' Decision to Orient Toward the EU, but Will Respect it

"For Russia, of course, it is not easy to accept such a choice, and not because of any 'imperial ambitions' attributable to Moscow. For 360 years, since the time of the Council of Pereyaslav, Russians and Ukrainians had considered each other part of one family, complete with its disputes and quarrels between relatives. However, we were always able to overcome difficulties and dangers together. Together we faced both joys and sorrows, and of course, the Great Victory [in the Second World War]."

"The best way for Russia to prove that we respect Ukraine as a sovereign state is to recognize its right to make choices.  But Ukraine must understand that any choice is first and foremost a great responsibility." The prime minister noted that in order "to join the wealthy European future, it is necessary to work hard, and not [merely] to 'jump'," referring to the Ukrainian youth rally protest phrase 'He who does not jump is a Moskal' (a derogatory term for a Russian or a Muscovite).  Medvedev continued, noting that if Ukraine wants "to live 'like in Europe', [it should] start by learning how to pay the bills, to Russia, for a start."

Russia Will Build its Future Relations With Ukraine Based on Pragmatism

"Our countries are neighbors, and cannot but cooperate," Medvedev noted. "It’s just that now this cooperation will be exclusively 'European' –rational and pragmatic. Russia intends to strictly pursue its national interests, and we will firmly defend them, as is the case with relations with any other partner. When building our relationship in the new environment, we will leave emotions and 'family feelings' aside. Additionally, we will no longer support the Ukrainian economy; it is a burden to us, and frankly we are tired of doing so."

"Perhaps it is this kind of cool pragmatism in politics and economics which has been lacking between our countries following the collapse of the USSR. And now, after all the difficulties and losses, we have a chance to build truly business-like, mutually beneficial relations."