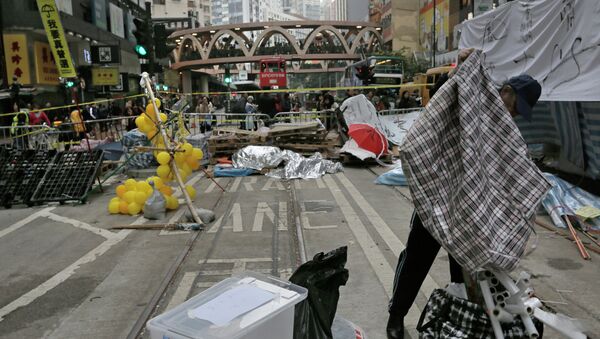 We Urge to Step Back: Occupy Central Leaders to Hong Kong Protestors
MOSCOW, December 15 (Sputnik) – Hong Kong's chief executive has declared an end to the protests which have occupied streets in the province since September, as police on Monday cleared the last protest site in Causeway Bay.

"With the completion of the clearance work in the occupation site in Causeway Bay, the illegal occupation action that has lasted for more than two months in Hong Kong is over," Leung Chun-ying told AFP. "Other than economic losses, I believe the greatest loss Hong Kong society has suffered is the damage to the rule of law by a small group of people," he added, remarking that the protest represents "not real democracy but a state of no government."

The South China Morning Post reports that Hong Kong police arrested 20 peaceful protestors as they removed the last vestiges of the demonstrations, which have dwindled from their height in October, when tens of thousands of people took to the street to protest against a decision made by China's authorities and the city's sitting chief executive to appoint candidates for the next leadership elections in 2017, rather than give residents a free choice of candidates.

Hong Kong Police Refuse to Arrest Three Leaders of Occupy Movement
In November, Hong Kong's high court began to grant injunctions to clear the protest sites, which have caused massive disruption in the city. The site in the working-class district of Mongkok was cleared on November 26 after arrests and violent clashes with police, and the main protest site in Admiralty was cleared on December 11 despite a sit-in by protesters, which held up proceedings.

According to the Morning Post, police arrested a total of 955 people during the course of the protests; 351 people were injured in clashes between the demonstrators and the police, including 221 protestors and 130 police officers. The paper reports mixed feelings among local residents about the pro-democracy demonstrations, which took a sharp financial toll on local businesses.