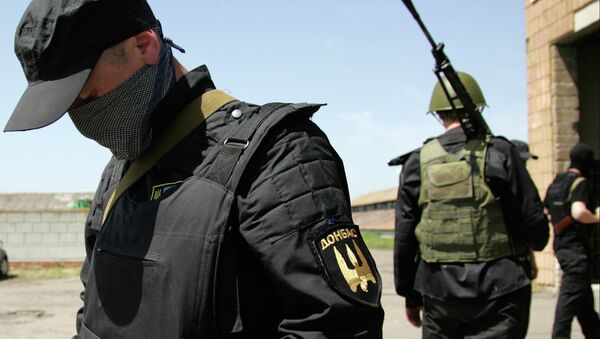 GENEVA, December 15 (Sputnik) – The actions of Kiev-controlled paramilitary volunteer battalions and the Security Service of Ukraine (SBU) in eastern Ukraine are in violation of human rights, a UN monitoring mission said in a report Monday.

"Most of <…> human rights violations appear to have been perpetrated by certain voluntary battalions or by the Security Service of Ukraine (SBU)," the report said. "The procedural rights of people have not always been observed, with reports of ill-treatment and reports of reprisals upon release."

The UN named arbitrary detentions, cases of torture, as well as enforced disappearances of those suspected of "separatism and terrorism," among the examples of human rights violations.

The country's Chief Military Prosecutor's Office made little effort to investigate the alleged violations, the Office of the UN High Commissioner for Human Rights (OHCHR) said.

A number of volunteer battalions were set up in April when the Kiev government launched a military operation in Ukraine's southeast against the region's independence supporters. In November, Ukrainian Defense Minister Stepan Poltorak said that the battalions would join the country's armed forces.

In early December, Kenneth Roth, the executive director of Human Rights Watch (HRW), said he was concerned about multiple "abuses" at the hands of the volunteer battalions in the east of Ukraine.

Over the past nine months, 4,707 people have died and another 10,322 have been injured in the conflict in Ukraine, according to a statement published Monday by the UN Office of the High Commissioner for Human Rights (OHCHR) on its website.

No less than 1,357 deaths have occurred from September 6, the start of the ceasefire between Kiev and the self-proclaimed people's republics of Donetsk and Luhansk in eastern Ukraine, through December 12. According to the statement, some of the registered deaths during that timeframe may actually have died prior to September 6.

The figures, provided jointly by OHCHR and the World Health Organization (WHO), include the 298 people killed in the Malaysia Airlines MH17 flight that crashed in eastern Ukraine on July 17.

According to the OHCHR report on the human rights situation in Ukraine released Monday, there were 498,347 internally displaced individuals in Ukraine as of November 30, with some 48,000 not registered by authorities.