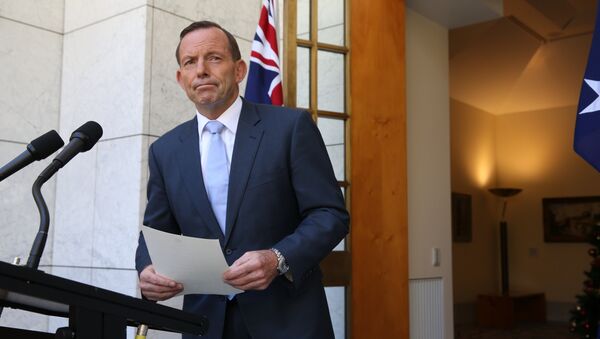 Tony Abbott, Australia's Prime Minister stated that he was proud of how the police responded to the Monday the hostage-taking incident in Sydney.

LIVE: Islamist Holds Hostages in Sydney, Several People Manage to Escape
MOSCOW, December 15 (Sputnik) – Australia's Prime Minister Tony Abbott said he is proud of how the police responded to the Monday the hostage-taking incident in Sydney.

"I'm proud of the way police and security bodies have responded to the disturbing events [hostage-taking] today," Abbott posted on Twitter.

The prime minister also added that the National Security Committee was briefed by Michael Bruce Baird, premier of New South Wales and minister for Western Sydney, and by NSW Police Commissioner Andrew Scipione on the situation in Martin Place, the city's central business district.

"It's been a difficult day, which has tested us, but like Australians in all sorts of situations, we have risen to the challenge," Abbott added.

Earlier in the day, Abbott called the incident "obviously deeply concerning," adding that Australian law enforcement and security agencies, being well-trained and professional, adequately responded to the situation.

At about 10 a.m. (23:00 GMT, Sunday), an unidentified gunman took  the staff and about 30 customers of the Lindt cafe hostage in Sydney. The suspect was reportedly carrying a backpack and a device that looked similar to a suicide belt. Several hostages have managed to escape so far.