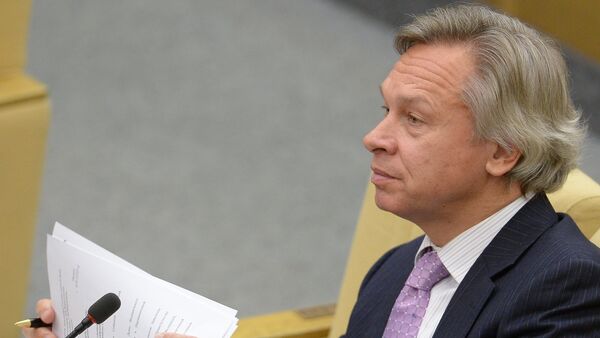 © Sputnik / Vladimir Fedorenko
/
Go to the photo bank
Subscribe
Several heads of PACE political groups have changed their stance on sanctions imposed on Russia, according to the head of the Russian delegation to PACE.

Russian MPs to Discuss US-Russia Relations
MOSCOW, December 15 (Sputnik) — The majority of European lawmakers at the Parliamentary Assembly of the Council of Europe (PACE), including faction leaders, are in favor of lifting sanctions imposed against the Russian delegation, Russia's top envoy to PACE said Monday.

"Several heads of [PACE] political groups have changed their stance. Spain's [Pedro] Agramunt [of the Socialist Group], who voted for sanctions in April, publicly spoke in Berlin about a shift in his position at a monitoring committee session that took place not so long ago. As far as I can tell, more and more lawmakers are having a similar change of heart," Alexei Pushkov, the head of the Russian delegation, told Izvestiya newspaper.

Pushkov, who also chairs a foreign affairs committee at the Russian lower house of parliament, added that four of the five group leaders at PACE wanted to see restrictions against Russia dropped, with Britain being the only nation seeking to maintain them, he said.

US, Canada, Ukraine Isolated Over UN Anti-Nazism Resolution: Lawmaker
This comes as Andreas Gross, a Swiss co-rapporteur for the monitoring of Russia, is preparing to make a three-day visit to Moscow on Tuesday to meet with representatives of the Russian Foreign Ministry, the Justice Ministry and the Federal Migration Service.

Izvestiya cited the PACE rapporteur as saying earlier that the majority of the assembly's members were looking to scrap the embargo imposed on Russia over its alleged role in the Ukrainian crisis.

Pushkov said that Gross would be visiting Russia under the aegis of the presidential committee, which still provides legal framework for cooperation between Moscow and the assembly after the Russian delegation walked out on a PACE session in April.